The Oxfordshire Celtic wedding harpist and singer is available for weddings, concerts and functions and is passionate about the folk music of the British Isles.
Share Facebook Twitter
Recommended 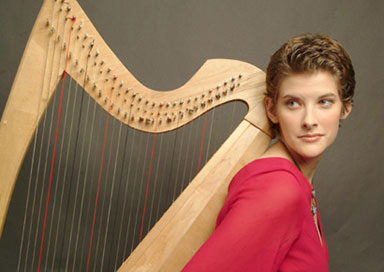 The Celtic Wedding Harpist and singer is available for weddings, concerts and functions and is passionate about the folk music of the British Isles. She also teaches and workshops harp and traditional music, and is involved with the folk and harp communities in the South East of England.

She plays the clarsach, the harp that has graced the courts of Ireland, Scotland and Wales for centuries. Part of a living tradition, this harp has a distinct musical heritage that has been handed down for generations.

The repertoire ranges from lively dance tunes to soulful airs, from well-loved songs to courtly dances. Underpinning this wide variety of music is the tradition of learning and playing music by ear. Other strands of music are weaving their way onto the clarsach, including classical, pop and jazz pieces.

The Celtic Wedding Harpist has been playing for special events and weddings since 2004. She is based in Oxfordshire and regularly plays in the surrounding counties and London.
She enjoys playing in a variety of different settings, whether for a evening banquet for two hundred guests or a romantic meal for two; a bubbly party or a formal church wedding. As well as creating a welcoming atmosphere, live music can also provide a structure for longer events, helping you move your guests from one setting to another.

The smaller size and portability of the the clarsach is a great advantage, allowing the clarsach to be played from balconies, in gardens, in courtyards, in caves...

Having completed classical training on the violin and voice, The Celtic Wedding Harpist was introduced to the harp while studying music and mathematics at University of Birmingham. While completing her degree, she sang as a Lay Clerk at St Chad's Cathedral as well as playing with the university ensemble Stella Maris, specialising in French and English medieval music. This has led to professional engagements including concerts at Aust Church and Southwark Cathedral.

However a visit to the Edinburgh Harp Festival convinced her of the beauty of traditional repertoire and her musical direction broadened. She has since devoted much of her time to absorbing, arranging and teaching traditional harp music, playing for spoken word as well as a wide range of musicians.

She plays for weddings, functions, events and concerts in prestigious venues such as Claridges, the Landmark Marylebone and Pendley Manor. She is also at home in more intimate and historical venues such as Missenden Abbey and Hatfield House, as well as marquees and gardens across the country.