This Yorkshire harpist began playing the Harp at the age of 9 and made her BBC debut in 1982 at the age of 10! She is now much in demand for weddigs and events.
Share Facebook Twitter
Recommended 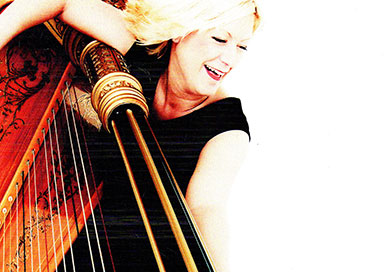 This Yorkshire harpist began playing the Harp at the age of 9 and made her BBC debut in 1982 at the age of 10! She is now in demand for weddigs and events.

Invitations then followed to perform at the Gulbenkian Theatre (Newcastle), Winyard Hall, Bowes Museum and at various other venues in the North East. Winner of Young Musician of Teesside in 1986, she became a member of the Cleveland Philharmonic Orchestra. Subsequently she joined the Cleveland Youth Orchestra and has toured Europe with them.

She graduated in July 1995 with a BMus (Hons) Degree after studying at the Guildhall School of Music & Drama with teachers; Professor David Watkins, Charlotte Seale and Helen Tunstall. During her course she was also a member of the Young Musicians Symphony Orchestra and the London Philharmonic Youth Orchestra.
Some of the highlights whilst studying were; playing for BBC Television's Christmas Presence (Dec. 1993) starring Cliff Richard; and also performing in Benjamin Britten's War Requiem at St Paul's Cathedral under the baton of Sir Richard Hickox. In May 1995 she was privileged to play at the VE Day Royal Banquet at the Guild Hall at which were present members of the Royal family and 50 Heads of State.

In August 1996 she was Harp tutor for the National Children's Orchestra (11yrs & under). In February 1997 she was honoured to form part of the orchestra backing for Opera singer Lesley Garret. Later that year, in May, she released her first public recording called Harping On under the label of Huntcliffe Recording Services.

In June 2000, she played for HRH the Prince of Wales during a visit to Sir William Turner's Almshouses at Kirkleatham.

She played for Brahms Requiem at Middlesbrough Town Hall which included the guest appearance of Sir Thomas Allen.

She owns and performs on a Lyon & Healy Concert Grand pedal Harp.