Formed in 1991, this flute and harp duo are available for weddings, parties and functions in the Bristol area as well as the Cotswolds and Midlands.
Share Facebook Twitter
Recommended 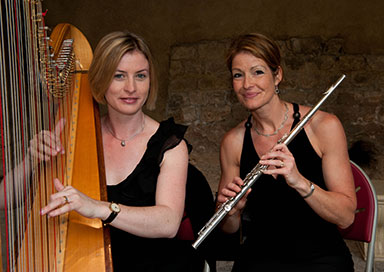 Formed in 1991, this flute and harp duo are available for weddings and functions in the Bristol area as well as the Cotswolds and Midlands. Much in demand throughout the UK, the duo has performed Mozart's Flute and Harp concerto and has given recitals for Classic FM and for music societies.

They also play for weddings, functions and corporate events and have played at many of the top venues throughout the Midlands and South West including the International Convention Centre, the National Indoor Arena, Hagley Hall, Swinfen Hall, Clearwell Castle, Thornbury Castle, Ragley Hall, The Assembly Rooms and The Roman Baths in Bath, Sherborne Castle, Dumbleton Hall, The Shakespeare Trust properties, Ashton Court, Leigh Court, Longleat and at many prestigious hotels such as The Royal Crescent Hotel in Bath. Their repertoire is wide, varied and includes both classical and light popular music. This duo are happy to arrange particular music for clients.

The Flautist:
Described by the Birmingham Post as possessing "deft control over rhythm and phrasing" and "producing flute tone of resourceful colour and attractive warmth", this falutist has been delighting audiences in venues across the UK and abroad since 1989. Her success as winner of the Young Artist of the Year competition in 1993 led to her debut recital in Symphony Hall, Birmingham, which was met with high critical acclaim. She has subsequently appeared at major venues, music clubs, festivals and on BBC television and radio.

As well as being Principal Flute of the Orchestra of the Swan, Birmingham Opera Company and Mid- Wales Opera ensemble, she is in much demand as a freelance orchestral player, performing with other leading orchestras including the City of Birmingham Symphony Orchestra and Birmingham Contemporary Music Group. She has worked under eminent conductors including Sir Simon Rattle and Pierre Boulez. She also loves theatre and enjoys working with the RSC.
She performs regularly with this flute and harp duo and a Baroque Chamber music ensemble led by Ruth Watson. She also enjoys performing concertos with the orchestra of the Swan.

She believes passionately in sharing her music with young people. As well as teaching the flute she is actively involved with education projects run by the orchestra. Her involvement in Lord Yehudi Menhuin's "Live Music Now!" scheme gave her the rewarding opportunity to work with children and adults in special needs schools and training centres as well as in hospitals, hospices and rehabilitation centres across the UK and Hungary.

The Harpist
This performer's musical education began at school where she gained distinctions in Grade 8 harp, oboe and piano. She gained BMus (Hons) from the University of Birmingham whilst continuing her harp studies with Robert Johnston (principal harpist City of Birmingham Symphony Orchestra).

She has performed concertos with regional orchestras and given recitals as part of this flute and harp duo. She has played for the CBSO, the Royal Shakespeare Company and is principal harpist for the New Bristol Sinfonia.

She enjoys teaching both the harp and piano and is much in demand as a freelance player in the South West.

The harpist from this duo is also available for solo bookings: Bristol Wedding Harpist

“Absolutely fantastic throughout and followed any instructions to a tee! On top of that, they played all the extra songs I asked them too with no trouble at all and played for the duration I required them too. Thank you very much for being a part of our special day and genuinely contributing so much to the atmosphere - I hope you enjoyed the day too! ”

“We were thrilled with our artist, they did a wonderful job playing music for our ceremony and were very accommodating with our choices. I found your service to be extremely professional and you were always in hand to help/answer any queries I would definitely recommend. ”