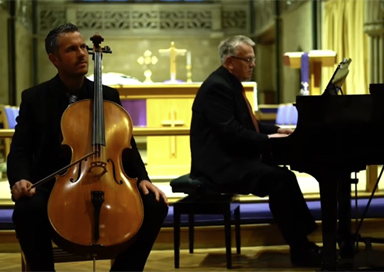 Looking for a cello and piano duo for a wedding? The New Forest Cello & Piano Duo are available for weddings and events in Hampshire and the South coast. They can provide their own digital piano if required and can offer a wide range of classical and popular music.

The cellist has entertained audiences across the world. Known for his musicianship and projection, he came to prominence after winning the prestigious Music at Beaulieu Competition in 2005. This led to solo performances at the Wigmore Hall; Steinway Hall; Adrian Boult Hall; Coda Hall; and Symphony Hall.  He then went on to win the prestigious Symphony Hall Recital Prize in 2010.

As a solo artist, he has played all the major concertos with orchestras throughout the UK.  Recently he has released two encore CDs and a celebrated rendition of the Elgar Cello Concerto. Future recordings releases include the Haydn Concertos. He regularly performs as a soloist on the Queen Mary 2, Queen Victoria and Queen Elizabeth for the Cunard Line.

The pianist has been Musical Director of a church in the New Forest since 1998, where he has the support of a thriving choir of adults and children. He continued his musical training while working as an evening newspaper journalist for 13 years, before switching careers in 1991. Successfully combining work as an organ recitalist, pianist, chamber musician and teacher, he has performed in some of the Europe's leading concert venues.

Recently he has recorded two albums with the cellist, given several concert tours, and performed on the prestigious P&O cruise line.