This Norfolk harpist has performed for a variety of events including weddings, funerals, anniversary and parties as well as corporate dinners and receptions.
Share Facebook Twitter
Recommended 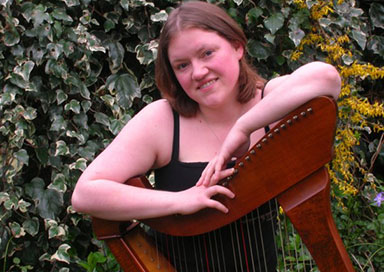 This Norwich wedding harpist showed an aptitude for music from an early age and began learning the harp at the age of 11 having already achieved many qualifications on the flute, piano and recorder. By the age of 14 she was performing regularly with many of the best amateur orchestras in Gloucestershire and surrounding counties.

At 18 she moved to Norwich to continue her studies at the University of East Anglia graduating in 2007 with a BA degree in Music (specialising in performance). During her studies she has been fortunate to study under some of the best tutors in the world including Madame Fontan-Binoche, Rhodri Davies and Daphne Boden. She also won several awards and prizes for musical performance including, most recently, the Dorothea and Rowan Hare Award for outstanding performance (awarded annually to the most promising performer in the UEA Music department).
She has been performing as a background musician for many years and is lucky to have been invited to play at many of the most exclusive hotels, private clubs and other venues in Gloucestershire, Norfolk and Suffolk.
She has performed for a wide variety of events including weddings, funerals, anniversary and birthday parties and private, public and corporate dinners and receptions. She has also performed in many solo recitals and orchestral concerts
Currently she divides her time between teaching, both at schools across East Anglia and privately, performing for functions, orchestral concerts and solo recitals, and writing a harp tutor for very young beginner harpists.
View similar acts:

Please note that this list is constantly expanding and being added to. If you would like specific songs or pieces that are not on this list please ask.