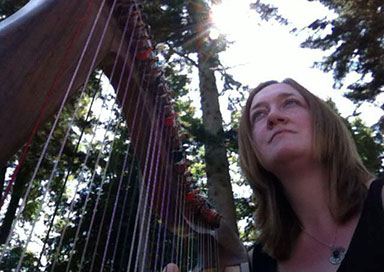 This harpist play a Pilgrim clarsach and began learning at a course at the Edinburgh International Harp Festival at the age of 9, continuing lessons at Howgate Primary school and then with Isobel Meiras in Edinburgh. She was a member of Na Clarsairean for many years, playing in concerts in venues such as the Usher Hall and the Queens Hall in Edinburgh. As one half of a harp duo she was delighted to win Silver Medal in the National Mod and while studying at The University of Edinburgh played at functions in hotels all over Scotland including Cameron House Hotel on the banks of Loch Lomond, Gleneagles Hotel in Perthshire and on one occasion for Royalty in The Balmoral in Edinburgh.

Nowadays, based in Perthshire, she play solo and like to play traditional Scottish and Gaelic melodies aswell as popular favourites. She is happy to travel to your event - recently she have played in Edinburgh at the Royal Botanic Gardens and Pitlochry at the Atholl Palace hotel, and several different locations inbetween. She can play outdoors but do require protection from the weather. She play without amplification, which for most venues and occasions works well - the sound of the harp carries and creates a lovely ambience both inside and out.

The clarsach (harp) is Scotland's oldest instrument. Triangular harps were known as far back as the 10th century, when they appear on Pictish carvings, and harp compositions may have even formed the basis for pibroch, the folk bagpipe tradition. Two harps from the 15th and 16th centuries can be seen in the National Museum - the modern clarsach is based on their design, though is bigger and has gut rather than wire strings.

“It was a wonderful day and you helped to complete it for us all! ”

“Just a quick email to say thank you so much for playing at our wedding on March 26th. You played beautifully and everybody has been commmenting to us about how great you sounded. We had a fantastic day, everything just came together nicely.The clarsach definately made our wedding truly unforgettable - Thank you so much! Kind regards. ”

“Thank you for your wonderful playing at our wedding and learning the song we had asked. It was great and everyone enjoyed it. Thanks again. ”