This harpist from the Highlands, has a sparky, mischievous personality that shines through her music. Currently based in Glasgow and available for weddings.
Share Facebook Twitter
Recommended 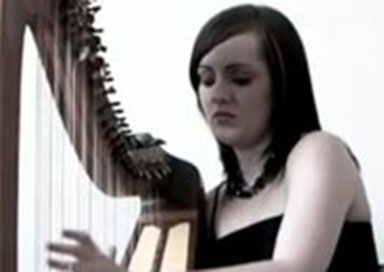 A first class Music Honours graduate and Alexander Stone Award winner, her 2 highly commended solo albums have gained her admirers worldwide allowing her to perform regularly throughout the UK, Europe and further afield.

To say that she stands at the forefront in today's Celtic harp revival is, among other things, simply a statement of fact. Even amid the profusion of innovative Scottish players who have emerged in recent years, she is unique in placing her homeland's oldest instrument at the helm of her three-piece band.

Her boldly distinctive yet exquisitely sensitive approach to the Scottish harp, or clarsach - considerably smaller than the classical version, and minus the pedals - derives equally from a deep affinity with its centuries-old Highland heritage, and a cosmopolitan attunement with today's global musical village.

Like many of today's top young Scottish folk artists, she began playing via the Feis movement, a network of Gaelic-based traditional music tuition across the Highlands and Islands. Starting on clarsach aged 10, she was taught in these early years by an array of leading exponents, including Corrina Hewat, Bill Taylor, Wendy Stewart and Alison Kinnaird. Even after moving to Edinburgh at 15, she continued to supplement her high-school clarsach lessons by returning north for Feis residentials during the holidays.

Even in her off-duty hours, she would usually be found in the thick of Glasgow's celebrated pub-session scene - and this full-immersion approach certainly paid off, with her graduating recital winning both first-class honours and the coveted Sir Alexander Stone Award for excellence in performance.

Among numerous glowing reviews, NetRhythms hailed her debut CD as "an eminently tasteful, refreshing and subtly uplifting album. . . a delight from start to finish", while Irish Music Review declared that it "heralds the arrival of a major new talent". Besides its "consistent quality and beauty", Rambles raved about her "distinctively contemporary and original compositions", which comprised around half of the 11 largely solo tracks.

Still based in Glasgow, she has travelled extensively with her music in recent years, performing around the UK, Europe, the US and as far afield as India, as well as leading workshops at international harp festivals. She has also become a key figure in the burgeoning folk revival on the Isle of Man, where she teaches once a month, meanwhile finding rural respite from the city. "It reminds me a bit of Ullapool there, with everybody knowing each other," she says. "It's great to escape to, but I love being in Glasgow - it's such an amazing place for music. For a long time after I moved from the Highlands, I didn't really know where I belonged, or if I belonged anywhere, but I feel much more settled now - maybe partly from seeing so much more of the world, and knowing where I want to come back to."

"Fresh arrangements, jazz elements and sheer virtuosity. . . This is an artist who understands her instrument, and plays it with such mastery that she is not locked into any genre" Rambles

"One of the UK's finest contemporary Celtic harpists and tunesmiths" Songlines