This Celtic harpist has since played at many weddings, concerts and events across the UK and abroad, including a concert tour of the Caribbean Islands in 2012.
Share Facebook Twitter
Recommended 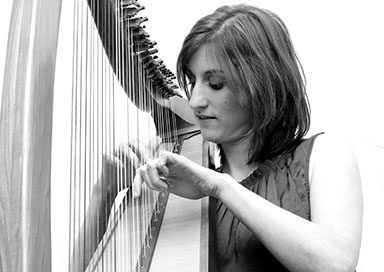 This Scottish harpist was brought up in the Highlands where she was involved in the strong traditional musical culture from an early age. Beginning her musical training on the piano at the age of five, she started playing the Celtic harp at the age of nine, taking lessons for some years from inspirational teachers including Alison Kinnaird and Heather Yule, before continuing to develop her own individual style of playing.

As a child she won many competitions with her harp performances, as well as on the piano and violin. She has since played at many weddings, concerts and events across the UK and abroad, including a concert tour of the Caribbean Islands in 2012.

“Her beautiful harp music created the perfect atmosphere during our wedding reception. ”