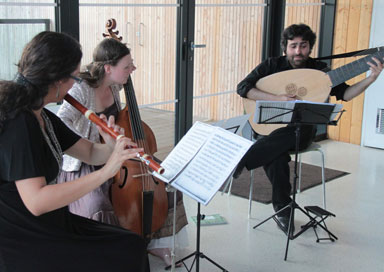 The ensemble was initially formed to explore the repertoire for baroque violin and continuo (theorbo), but is expanding to include some of the best players and singers on the scene to perform chamber music and large scale works.
Their repertoire ranges from the 14th century Ars Subtilior; Elizabethan lute songs by Dowland and Danyel; French music for viol and theorbo by de Visee and Marais to English masques and operas such as Blow's Venus and Adonis, Purcell's Dido and Aneas and the Fairy Queen.

Musician 1
One of the most exceptional musicians of her generation, she is a rare example of being equally accomplished on many instruments, playing baroque and renaissance violin, viola and flute; viola da gamba and double bass.

She has toured all over the world with the UK's leading baroque orchestras such as Orchestra of the Age of Enlightenment, the Gabrieli Consort, the Academy of Ancient Music and the New London Consort among others and is now devoting her time and passion to her ensemble.
She has recently been on the international faculty of the festival La Musica del Pasado de America in Caracas, Venezuala as professor of baroque string playing.

Musician 2
He was born in Tel Aviv and studied at the Hochschule fur Kunste, Bremen with Stephen Stubbs and in other prestigious colleges in Europe.
He has played continuo with many orchestras and ensembles such as the Academy of Ancient Music, the Scottish Chamber Orchestra, Scottish Opera, I Barrochisti and ensemble Galatea.
He is currentlypursuing a career as a soloist and is working towards his debut recording of French theorbo music.
As well asearly music he finds inspiration in Jazz and Indian music.

This act also has the option of a battery amplifier which is very useful for outdoor bookings.