This Latin Quartet draw on Latin American influences to play a unique repertoire in this Latin string trio with accordion for weddings, events and fiestas!
Share Facebook Twitter
Recommended 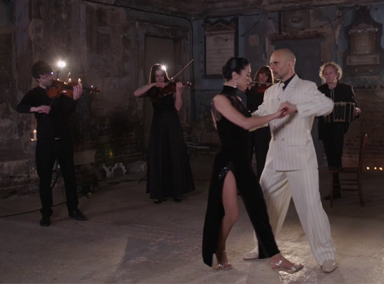 If you are looking for a classy quartet specialising in Tangos and Latin American repertoire then look no further!

Whilst working in Mexico, the musicians discovered a repertoire that was rarely or never performed in the United Kingdom. They collaborated with the renowned Yucatecan guitarist Cecilia Perera, and their interest in exploring this music led to performances with the Grammy Award winning Cuarteto Latinoamericáno, and at the 2008 International Chamber Music Festival in Mexico City's Bellas Artes Theatre.

After personnel changes which led to a new beginning for the group, the quartet, along with founding member, cellist Jonathan, reaffirmed their intention both to bring vibrant performances to audiences and play an active role in the education of young musicians.

The quartet continues to develop and perform its own blend of contemporary Latin American and British repertoire, and has just released its second album, Language of the Heart.

The evolution of the album has been complex and exciting, enabling a vibrant collaboration with the virtuoso bandoneonist Julian Rowlands, alongside input from Mercury Award-winning producer, Gerry Diver, Grammy nominated and Brit Award winner, Nick Ingman, Classic FM Hall of Fame composer Will Todd and many other talented and generous people.