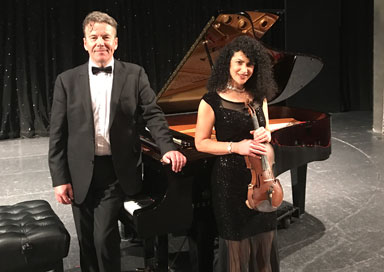 Are you looking for a piano and violin duo for your wedding or event in London? This duo enjoy playing for weddings and events alongside their concert schedule and can perform romantic classical music as well as popular songs including favourites like 1000 Years and All of me by John Legend.

This duo's partnership began on a Eurostar train to London in 2004, when the 2 musicians were each returning from separate performances in Paris.

Since then, they've given over 500 performances together, broadcast on BBC Radio 3, Classic FM, WQXR (USA) and recorded an acclaimed disc of music by Szymanowski on the Naxos label, described by the American Record Guide as 'a superlative recording'.

Their performances have taken them to Hong Kong, USA, the Middle East, New Zealand and across Europe. They are based in London, where they have given recitals for the London Chamber Music Series and Rothschild's Classical Recital Series, and have performed at London's South Bank, Wigmore Hall, St. John's Smith Square and Kings Place. Future performances include recitals in South Africa, Las Vegas, San Francisco, Cincinnati and across Israel. They will also be releasing a new recording of their own arrangements of music by Gershwin and by popular demand, Volume 2, of Side by Side.

This London piano and violin duo are known for their heartfelt and fiery performances, along with colourful programming, making them a firm favourite with audiences.

The duo have performed as resident musicians at The East India Club, City Livery Companies, The Ritz, Claridges ,The Ivy and have performed for events at all the top London hotels.

Private events include the wedding of the artist Aneesh Kapoor and parties for Michael Palin, Arnold Schwarzenegger, Coldplay, Sting, Teresa May and numerous heads of state, The Daily Mail, Royal Horticulture Society and the Royal Medical Society

They have played at launches for The Rosewood Hotel, Lexus Cars and The Britannia Cruise Ship and performed on cruise liners for Crystal, Cunard and Holland America.

They can offer solo violin, violin and keyboard, piano, organ and even have their own harpsichord.

“Very talented and professional Musicians, All requests were played beautifully including songs they learned specially for the ceremony. Even provided a sample on request to give us peace of mind leading up to the day. Extremely good communication and very pleasant to deal with. Highly recommended. ”

“Thank you for the beautiful music you played on our wedding day. It was our favourite part of the whole day. You are incredibly talented musicians and we're so happy you were there to celebrate our marriage. You helped us create special memories that we'll treasure forever. ”

“Before last week's events become just a lovely memory, I wanted to thank you both for helping to make Deborah and David's wedding celebrations so very special. The wonderful music at the chupa made the ceremony a truly magical experience, and your playing at the dinner helped create exactly the atmosphere we wanted - we can't thank you enough! A further thank you to Nicholas for his contribution to making the sheva brachot on Sunday such a lovely evening - something that all our guests seem agreed upon - and particular thanks for his patience in allowing our granddaughters to "help" out! With kind regards and many thanks. ”

The Carter and Mowbray Families,

“I just wanted to say a massive thank you to you and your keyboard player for playing so beautifully at our wedding. The music really was so moving and perfect for the day, and created such a fabulous atmosphere. Thanks again! ”

“We are just starting to come down from our amazing weekend and wanted to say a huge thank you. It was so nice to meet you yesterday. The music was wonderful- unfortunately, it all went by so quickly for me that I will have to watch the service back on the video to really appreciate everything that happened. Thank you so much for making it such a special ceremony for us. ”