This Lancashire Irish band consists of three fantastic musicians and vocalists who can play harmonica, flute, bluegrass banjo and percussionist between them,
Share Facebook Twitter
Recommended 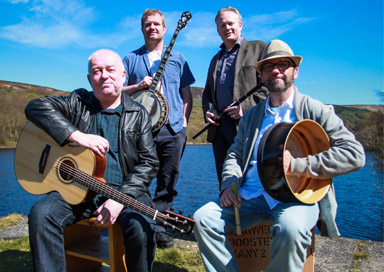 This Lancashire Irish band consists of three fantastic musicians and vocalists who can play harmonica, flute, Uilleann pipes, banjo, guitar and percussionist between them. They can be booked as a duo (advertised fee), trio or quartet and are happy to perform anywhere in the North West and beyond.

Matt is an accomplished harmonica and flute player who is as much at home playing Irish traditional music as he is the blues. (He won the British Blues Harmonica Championship when he was only twenty-one). As well as being a master of the harmonica, he is also a fine singer and uilleann piper.

The 2nd player is a superb singer, one of the best interpreters of traditional song on these shores and a skilled, dynamic guitar player, equally adept at accompanying vocals and instrumental music.

The 3rd player is one of the best bluegrass banjo players this country has ever produced and he's also a dab hand at playing Irish traditional music as well. His spirited, soulful picking gives a great lift to the music.

The 4th player is a brilliant percussionist, equally adept on bodhran, cajon, congas and a host of other instruments. Drawing on a huge range of influences, from Irish traditional music to Brazilian Samba, he conveys an irresistible drive and energy to everything he plays on!

“No problem with the booking process at all. The act were very very communicative and punctual. They even played some songs that were not in their normal reperrtoire by my request (they learned the songs especially for us). The lead singers voice was amazing. My Irish colleague who the event was for was amazed at the proper traditional Irish music they played. She said it is so hard to learn. To sum up amazing, really nice guys and would have them back without a shadow of a doubt ”

“They were brilliant, all of the band very friendly and were very nice to the people at the party. All smartly dressed and were there right on time. No problem with the booking process. ”

“Really good fun at our wedding. Everyone commented how good the band were. ”

“Second time we have booked these guy's, they were equally as fantastic as the first time, would have no problem recommending them to any one. Very talented musicians. Prompt arrival and very agreeable and flexible, many thanks. ”

“The band were fantastic, everything went brilliant - the music was wonderful and we would definetly hire them again. They made the day thanks. ”

“Couldn't have been happier with the band. Catered to our needs perfectly and created a fantastic atmosphere for all of our guests. ”

“Really good fun, got all ages up on the dance floor which was great! ”