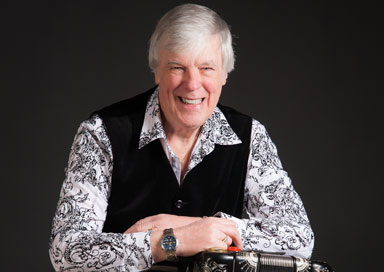 The Newcastle Accordion Player has a phenomenal repertoire of music and songs covering world music. He has performed in Scandanavia, France, Bermuda, Jersey CI, and the UK, and has entertained on many cruise ships.

His repertoire covers songs and music in German, French, Italian, Russian to name but a few.

The Newcastle Accordion Player is the ideal entertainer for Irish nights, Scottish nights, French nights, and Bierkeller nights, which he can do as a solo or along with other musicians. He is in great demand to provide music and romantic songs for champagne receptions at weddings

He both writes for, and appears in "Accordion World" & Accordion Profile" magazines and regularly appears as concert artist at accordion festivals in UK and France.He has appeared several times on both ITV and BBC television on "The One Show" with Chris Evans where he received a standing ovation

No matter what the style of event, The Newcastle Accordion Player is above everything, a real entertainer, engaging his audience throughout his sets. He plays an accordion built to his specification with midi capability, and performs through 2 Roland expanders to produce a truly orchestral sound.

As one of the UK's leading exponent of French Bal Musette music he has twice played for the Tour de France cycle race both recently in North Yorkshire for Le Grand Depart 2014 and in France in 2003.

“He is a true professional. He is a charming gentleman who played for a family gathering. His talent is amazing and his repertoire is vast. Everyone was up dancing and he made it very personal to our requirements. We all thoroughly enjoyed the evening and I would have no hesitation in recommending him for your function. Many thanks and we look forward to seeing him again. ”

“We booked him to perform at our wedding. My wife's late grandfather made his living travelling Scotland playing his accordion and I wanted to find a musician who could play to surprise my wife and my father-in-law on the morning of our wedding. He was perfect! Following initial email correspondence I spoke with him on the phone and explained what I wanted and he was happy to accommodate all my requests, even playing the Maigret Theme song from the 1960s. As part of his fee he said he would travel to Edinburgh the night before and stay in a nearby hotel which was perfect as I ended up asking him to be at our venue at 7.15am to play for the bridal party during breakfast. he arrived promptly and set himself up without any hassle. He played beautifully for the bridal party of roughly 10 people and brought a tear to my wife's eye as she remembered her late grandfather. Once the bridal party were finished the remaining house guests, about 40 people, were welcomed to the breakfast room where he introduced himself and held everyone's attention through his fantastic accordion playing and vocals. He did far more than I expected and it was a pleasure to have him as a unique and special part of our wedding. Thank you so much. ”