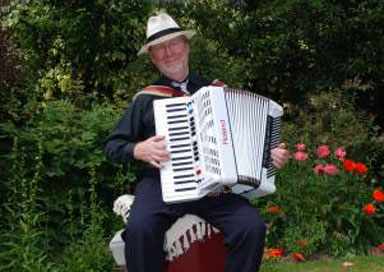 The Yorkshire Accordion Player took up the accordion in his early twenties, after playing guitar and bassoon for the previous decade, and has been playing professionally ever since.

He has performed in a great variety of places including:

It need not cost the earth to hire a professional musician for your function, to make it really special!

He has a wide-ranging repertoire of popular standards from the 1890's to the 1980s, consisting of folk tunes from Ireland, Wales, Greece and Russia.

He can also provide themed entertainment for French, English, Italian and Scottish events.

For any of the four themed specialties, by prior arrangement only, he can provide song sheets for the relevant theme, and lead a singalong.

He can also play live for ballroom dancing and a limited amount of rock, pop, and disco styles, as well as solo playing for Barn Dancing and Scottish Dancing, if people know the dances.

(Strolling with a heavy accordion is tiring, and the sound is not so good)

“He was lovely. Very happy with the music he played. My late mum would have enjoyed his playing immensely. Did exactly what was required. Would definitely use him again. Many thanks. ”

“Wow what can I say. He was amazing at our wedding, we loved him being there & well his talent is just amazing. He made our wedding breakfast amazing as typical Italians we like loud and fun & he defiantly gave us that. I would love to use him again! Thank you again. ”

“He was terrific. His accordion playing was excellent and just right for then occasion. He was unobtrusive and move around, so he was never in anyone's way but everyone could hear him. His repertoire is extensive and all the tunes were known to us , such as film and tv themes and traditional English and French country tunes. I would certainly recommend him. ”

“He arrived early, he was very professional, he was amicable and highly entertaining. We think he had an extremely good manner. Would book him again. ”

“Hi Geoff, Firstly, I want to thank you for being so accommodating at such last minute, and also a HUGE thank you to our performer who was unbelievable. Everyone absolutely loved him, he was smartly dressed and played beautifully. He also integrated very well within the party and was exactly what everyone needed to cheer them up! I would 110% recommend him to anyone! ”

He has developed a battery-powered PA system built into my accordion case, which is loud enough for most venues and allows me to perform anywhere with no need for trailing wires.