This North Wales harpist has received tuition by some of the best harp teachers and has won many prestigious awards at festivals and events throughout Wales.
Share Facebook Twitter
Recommended 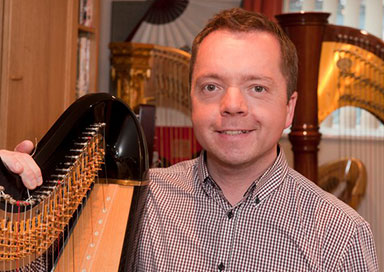 This North Wales harpist has received tuition by many recognised Harp tutors in Wales and has won many prestigious awards at festivals and events throughout Wales.

He has also travelled abroad as a Harp soloist and accompanist, appearing and broadcasting on the BBC network. He has also performed at the Royal Albert Hall sharing a platform with Soprano Rebecca Evans and many other established performers. He has also released 3 CDs with record company Sain. The first was released in 2000, the second in 2002, and recently his new album in August 2004.

Around Wales this harpist is a well known accompanist and is always on demand at different festivals and events. He is the resident Harpist at three very popular and award winning venues.

A well known concert entertainer in Wales, he has also travelled abroad, playing in France, Germany, Holland, Canada, Prague, Switzerland, Edinburgh, Paris and Ireland as a Harp Soloist and accompanist.

He has also appeared as a soloist and accompanist on the BBC television and radio networks.

He appeared in the 1,000 voices Festival at the Royal Albert Hall where he was a guest soloist in 1997, and shared a platform with Soprano Rebecca Evans. Other soloists with whom he has accompanied and shared platforms are Bryn Terfel, Eirian James, Shân Cothi, Gwyn Hughes-Jones, Rhys Meirion, John Eifion and Annette Bryn-Parry to name just a few to mention.

He has also accompanied soprano singer Kathryn Jenkins and X Factor star Rhydian Roberts at concerts around the UK.

His favourites style is light music and of course Cerdd Dant!

In his spare time, he is a keen member of “Côr Glanaethwy” of Ysgol Glanaethwy in Bangor where he sings and also accompanies the choir on harp.

Since the new millennium he has been very busy, travelling abroad to special concert events and one special tour was Canada with the Caernarfon Male Voice Choir in 2000.

More recently he travelled to Shaoxing, China with Ysgol Glanaethwy who were competing in the World Choir Olympics and sang with the senior choir and accompanied the youth choir on the harp.

“We’d like to thank you for making our special day so wonderful. I’ve never heard a harp played with such skill. Once again thank you ”

“On behalf of the Maelor Music Society may I thank you and Annette for such a wonderful concert in Henley on Wednesday.The feedback has been fantastic already, and your performance helps societies like ours to grow and promote and makes it a two way excercise. We know you enjoyed yourselves in our company and hope you had a safe journey home. ”

“Thank you so much, the music was absolutely beautiful. I loved being able to hear you playing while we were being whisked around for the photos.Diolch yn fawr iawn!! ”

“I just wanted to say thank you so much for the beautiful music you played for Richard and I at our wedding at Nunsmere on 14th May. The harp was perfect and your recommendations and choice of music during the reception were beautiful. Lots of people commented on how nice the harp and music were. With best wishes and kind regards ”

“Thank you so much, the music was absolutely beautiful. I loved being able to hear you playing while we were being whisked around for the photos. Diolch yn fawr iawn!! ”