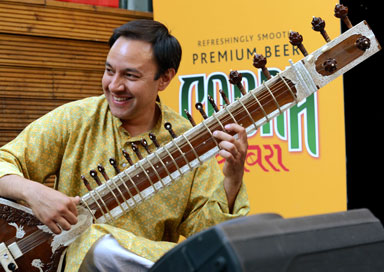 The London Sitarist is available for weddings, private functions and events and can be hired as a solo sitar player or as a duo with a tabla player. You can also add other musicians including Bansui flute players and as well as being trained in Indian classical music he can also play a selection of Western pop hits on sitar.

He began his musical training at an early age and by the age of 16 had found the instrument that would be his life, the sitar. His teachers have included Clem Alford (the first ever European sitar player), Pandit Subroto Roychowdhury of Senia Gharana and Wajahat Khan (direct descendent of Mia Tansen the great musician, one of the nine jewels in Moghul court of Emperor Akbar).

The London Sitarist's compositions have been performed by Erich Gruenburg, Joji Hattori and Indo-Jazz Fusions and he has written for many library music companies. As well as his playing and compositions being heard on two Nimbus CD's and two on FMR, he can also be heard on Sarah Brightmans' Eden and Kevin Spaceys' Beyond the sea and has recorded a solo album for Cooking Vinyl Records.

The London Sitarist has performed all over the world including, France, Germany, United Arab Emirates, Australia, America, Bangladesh, Sri Lanka, and two very successful tours in India as well as a number of performances for the BBC in the UK. He is also in demand as a session musician and appears regularly on television and radio. In the education field He has taught A-level music technology and Composition both for London borough of Camden and has taken workshops in Indian music for The Royal Welsh college of Music, County of Suffolk, Live Music Now, City of Birmingham and 100's in the London area.

Alongside his Bollywood and classical repertoire this versatile sitarist can also perform a few Western pop songs:

“Recently booked on June 18th in Henley in Arden. It poured down with rain all day and he just played through out and was received very very well from my mixed relation audience. The sound was beautiful and set a great back ground ambience – lots of young and older loved ones said it was a stroke of genius having the brilliant sitar player. ”

“They were smart, polite and punctual. Very talented musicians, enjoyed the music and great feedback from our guests. ”

“He was great and also very flexible, as timings changed a couple of times, and was really prompt at answering emails. Great to work with. ”