This harpist is available for weddings & special occasions and offers a diverse repertoire of Scottish traditional music alongside classical and popular music.
Share Facebook Twitter
Recommended 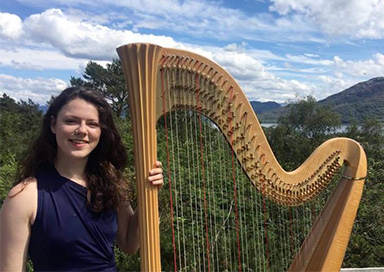 The Highlands Wedding Harpist is available for weddings and special occasions and offers a diverse repertoire of Scottish traditional music alongside classical and popular music. Her music is an elegant and beautiful addition to any special occasion and is a popular choice for wedding ceremonies and drinks receptions and she can perform a mix of instrumental music and songs with the harp.

She will provide you with a personalised experience and guide you throughout the process. There is a range of options available including performing a range of genres on the pedal harp or on the lever harp. Her repertoire list is extensive, covering modern pop and film music, Celtic music and classical music. She is always happy to take your requests.

Born and brought up in the Highlands of Scotland surrounded by Gaelic song, music and culture, The Highlands Wedding Harpist's music is largely influenced by her Gaelic roots as well as her extensive classical training. This mix of the traditional and the classical has been fused with playing modern, contemporary music giving her music a distinctive tone, sound and voice.

She  graduated with a first class honours degree on the pedal harp from the Royal Northern College of Music in 2017. Upon graduating she studied the harp in Brest, Brittany for a year.

The Highlands Wedding Harpist has twice been nominated for the BBC Radio 2 Young Folk Award, and has played at numerous festivals around the UK - highlights include Celtic Connections, the Hebridean Celtic Festival and the Cambridge Folk Festival.

In 2018 she won the prestigious Gaelic Traditional Singing Gold Medal at the Royal National Mod. Since then she has gone on to sing at Dover House in London, at Am Bothan in Edinburgh and representing Scotland at the International Pan Celtic Festival in Ireland.

She was the winner of the 2019 International Pan Celtic Festival traditional harp competition. She has performed in some of the country's most notable venues and festivals including The Glasgow Royal Concert Hall, The Usher Hall, The Bridgewater Hall (Manchester) and a personal highlight was performing as the principal harpist of NYOS in the BBC Proms at The Royal Albert Hall.

Available on either lever harp or the pedal harp

Only available on the pedal harp

Celtic Repertoire
This is a small representation of my repertoire of well known traditional Scottish and Irish music. I have a much larger collection available.