This quartet is one of the most celebrated and critically acclaimed acts in the UK and pride themselves on offering a competitively priced bespoke service.
Share Facebook Twitter
Recommended 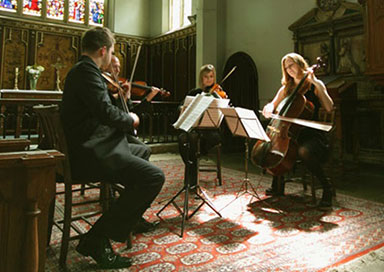 The Modern String Quartet is one of the busiest and most popular string quartets working commercially in the UK. They frequently play for weddings and parties and have recorded for theatre, film and CD.

They has been nominated for the Perfect Wedding Awards (Best Entertainment) and has won Jacqueline Gold’s (CEO Ann Summers) #MOM Men on Monday twitter award. In 2012 they were was chosen by renowned businessman and former Dragons’ Den star Theo Paphitis as a #SBS Small Business Sunday winner.

In 2014 the Modern String Quartet recorded their first album which featured a collection of modern pop songs arranged for strings which is available on CD and digitally through iTunes, CD Baby, Google and Amazon.

They recently played for the Professional Publishers’ Association Centenary Gala (performing Doctor Who as the ‘Cover of the Century’ award was presented to the Radio Times), the opening of Oscar de la Renta Bridal on Mount Street (for Niemierko) and with the trumpeter Tine Thing Helseth during the turning on of the Regent Street Christmas Lights for Classic FM/EMI.

They played during the ceremony for the wedding of the late Peaches Geldof and for Greg Churchouse from Scouting for Girls and have featured in Wedding Ideas Magazine, Hello! And on East London Radio and many wedding blogs.

They regularly performs at the major venues in London and the South and recent engagements have taken place at:

“The Modern String Quartet were amazing. Extremely punctual and smartly dressed. The booking process was straightforward and they were a delight to have for the evening. ”