This London string quartet are equally at home playing Bach, Mozart, Gershwin, Oasis and Blur, making them the ideal complement to any wedding or celebration.
Share Facebook Twitter
Recommended 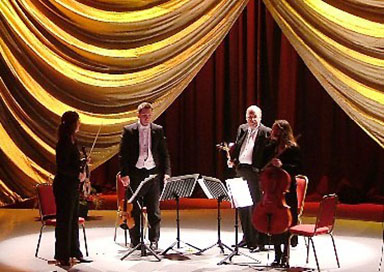 This quartet are equally at home playing Bach, Mozart, Gershwin, Oasis and Blur, making them the ideal complement to any occasion. Their professional approach, backed by over 25 years of experience, comes at a price to suit every pocket.

The sole aim of the quartet is to delight - formed in 1988 from the string principals of the Scarborough Spa Orchestra, it has become one of the most sought-after quartets in Britain. Its diverse range of repertoire, allied to a dynamic style of performance, captures and enthuses audiences of all ages and backgrounds. With the catch phrase ‘The Different String Quartet’ they can delight with an evening of original works for the genre by the great classical masters, a Palm Court programme, or a themed entertainment using the best of popular song from the Victorian era to the present day. The members are all conservatoire-trained professional full-time symphony musicians whose varied careers reflect the diversity of the repertoire, working for major professional orchestras, session work (pop as well as classical), West End Shows and in television.
Their approach to popular music is both refreshing and adventurous. From the beginning, it commissioned works from some of Britain's finest string arrangers, so that its unrivalled library now extends from Bach to Rock via Strauß, Gershwin, Bernstein, Duke Ellington, the Beatles, Abba, the Carpenters, Led Zeppelin, Radiohead and Queen, to name but a few. The haunting and the beautiful, the lively, the tearful, the passionate and the humorous, all can be heard in a recital. Variety, originality and entertainment are its watchwords.
Alongside its concert work, the quartet has a foothold in every other field of entertainment. They perform for corporate events, weddings and other private functions, playing in hotels, Banqueting and Livery halls, homes stately and not so stately, and have made several TV appearances. In 1995, Des O'Connor invited them to perform on his Central Television network peak-time show Pot of Gold. At the 2003 opening of Andrew Lloyd Webber's collection of Pre-Raphaelites at the Royal Academy of Arts, the BBC Arts Correspondent, Rosie Millard, was so taken with them that she began her 10 o'clock News report with their performance of Stairway to Heaven.
Their performances are enjoyed not only in Britain, but throughout the world, as well as on the high seas. During a two-month contract on Holland-America's MS Noordam, passengers voted the quartet near perfect marks in a customer satisfaction survey. Cunard invited them to perform three concerts on the prestigious MS Caronia (sister ship to the QE2) during its trans-Atlantic cruise to the Caribbean and P & O chose them as opening entertainment at the launch, in the presence of the Princess Royal, of their flagship Adonia, as well as entertaining guests at a charity ball aboard the Aurora and a subsequent Caribbean cruise aboard the Arcadia.
Weddings
So far, this quartet have performed at over 1,000 weddings to great acclaim. As well as a complete playlist of all the most often-chosen numbers for this event, in the unlikely case that they do not already have your favourite song, it can be specially arranged for the occasion.
View similar acts:

“Thank you so much for your fabulous performance at our wedding on New Year's Eve. We were over the moon with Heroes, and the sheet music you gave us was a wonderful surprise. Thank you for being a part of our amazing day. ”