This lively, charismatic and vibrant string quartet have played at a range of functions including wedding receptions, garden parties and summer balls.
Share Facebook Twitter
Recommended 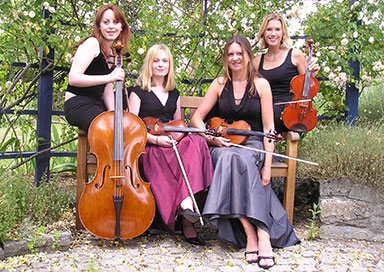 This lively, charismatic and vibrant quartet have played at a range of functions including wedding receptions, garden parties and summer balls. They have played at Terence Conran’s restaurant Bluebird in London, as well as the Fitzwilliam Museum in Cambridge, The Dorchester, London and Powderham Castle in Exeter.

The Lead Violinist: Over the last decade the violinist has travelled all over world with various ensembles, most recently the world-renowned Trinity College Chapel Choir, with whom she held a choral scholarship. She holds a BA Hons in Music and Languages from Cambridge University.

The Second Violinist: A keen musician from an early age, she has led several orchestras and string ensembles, many of which she has organised herself. She is also a part-time novelist.

The Viola Player: She has been playing the viola since she was eight, “because she liked the name”! She also plays piano, flute and mandolin. Although classically trained, she has a passion for folk music and loves Irish fiddling along with her boyfriend, a keen accordion player. Her occupations include instrument retail, composing and writing.

The Cellist: She started learning music at the age of three, and since then has played in settings as diverse as London’s Jazz Café and St John’s Smith Square. She has performed in masterclasses with Steven Isserlis and Raphael Wallfisch, and her cello, a replica of a Stradivarius, was made by the British maker Colin Irving.

Over the course of several years, they have built up a wide-ranging repertoire of music. Below is a list of our most popular requests, which is by no means exhaustive. If there is something in particular that you would like them to play, they will happily arrange it for you, as they have done many times before. They adapt every performance to suit the occasion!

“You were all great - thank you for being so accommodating and flexible on the day. Your time and effort in organising the music were truly appreciated and your music was the icing on the cake…everything we had dreamed of. ”

“A quick note to say thank you to the quartet for playing at our wedding last month. The music and choice of music was excellent, and we all share the view that had you not been there, there would have been something missing from the day. Many guests commented on your playing and were similarly delighted. My parents also asked me to pass on their grateful thanks and best wishes with ours, to you and the other girls. ”