This Surrey cello duo provide music for weddings and events and are a great alternative to a string quartet, especially when space or budget is an issue.
Share Google+ Facebook Twitter
Recommended 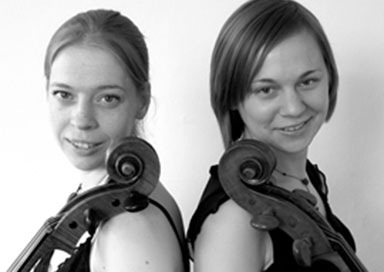 This Surrey cello duo provide music for weddings, parties and corporate events and are small enough to be a perfect accompaniment for the most private functions but also suitable as a different, quirky alternative to the string quartet. They offer a luxurious string sound at a more competitive rate and cater to your specific needs.

The duo was formed in the summer of 2004 from a desire to explore the rich but unknown repertoire of this great combination. They were soon heard to great acclaim at major venues across London.They are outstanding young professional cellists with a great deal of performing experience behind them.

They have played recitals at Hyde Park Chapel, St Mary le Strand, St Magnus the Martyr and St Olaves in London, at the Kingston Cello Festival and in Weymouth as part of the South Coast Recitals Network. They have also performed for functions at The Mansion House, City Hall, 30 St Mary Axe (The Gherkin), Channel 4, Renaissance Chancery Court Hotel, the Queen’s House and the Cutty Sark.
Audiences and clients at these high-profile events include the Duke of Edinburgh, Sir Nicholas Serota, Sir David Attenborough and Anton Mosimann to name a few!

1st Musician
She graduated with Distinction in the Postgraduate Diploma in Performance from Trinity College of Music in 2005, where she was a scholar studying with Lowri Blake and Joely Koos. She was principal cellist of the Symphony and Chamber Orchestras and won many prizes including the Classical Concerto and the Solo Bach Competition. She gained her undergraduate degree at the University of Birmingham where she was invited to perform the Saint-Saëns Cello Concerto with the University Sinfonia.
She is a freelance orchestral cellist and performs regularly with orchestras such as the Royal Philharmonic Orchestra, Royal Philharmonic Concert Orchestra, RTÉ National Symphony Orchestra of Ireland (including recent trial), Southbank Sinfonia, and the BBC Concert Orchestra (mentor scheme).
She has travelled the world with the Sonas Quartet on the Saga Cruise Ships, at the Wigmore Hall and played Tchaikovsky’s Rococo Variations with the St Paul’s Sinfonia in 2008.

2nd Musican
She studied at Trinity College of Music with Alison Wells and Natasha Pavlutskya. Whilst at Trinity she won the Leonard Smith Prize for string duo and also gained a scholarship to continue her studies with Natasha on the postgraduate diploma course.
She performs regularly as a chamber musician and has recently performed Mendelsohn’s Octet with Krysia Osostowicz in aid of children traumatised by the war in the former Yugoslavia. She has been guest soloist with Wandsworth Symphony Orchestra, and performed Tchaikovsky’s Pezzo Capriccioso with St Paul’s Sinfonia in 2008.

Signing of the Register