This harpist is available for all events and has been resident harpist at Le Meridien Grosvenor House Hotel on Park Lane and at The Churchill, Portman Square.
Share Facebook Twitter
Recommended 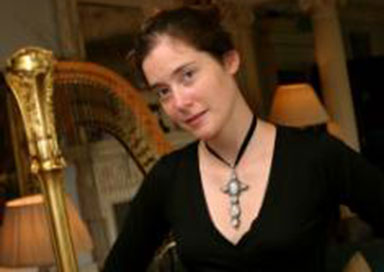 This wedding harpist is available for weddings in London, Kent and the South East and has played for numerous private functions in such prestigious venues as The House of Commons, the Tower of London, Claridges, The Dorchester, The Berkeley, The Langham and Leeds Castle. She has been harpist in residence at Le Meridien Grosvenor House Hotel on Park Lane and at The Churchill, Portman Square.

She graduated from University College London with a first class honours degree in Classics before pursuing a Masters in Music Performance at the Guildhall School of Music and Drama where she specialised in Early Music.

She has since been in great demand throughout the country as both a harpist and singer and has performed in some of Britain's top concert venues including the Royal Albert Hall, Royal Festival Hall, Barbican, St. John Smith's Square, St. Martin-in-the-Fields where she was also a choral scholar, Cheltenham Festival, Leeds Town Hall and Birmingham's Symphony Hall under such conductors as Sir Andrew Davis, Pierre Boulez and Sir Simon Rattle.
As a former member of the BBC Symphony Chorus she has often performed at the BBC Proms, including the Last Night of the Proms.
She regularly plays for orchestral concerts and ensemble engagements. Particular highlights include performances of Britten's Ceremony of Carols in Westminster Cathedral and a Debussy world premiere conducted by Charles Hazelwood for the Broomhill Trust.

She enjoys an international career and has performed at the Salzburg and Istanbul Festivals and extensively throughout Europe. She was engaged as a solo artiste for the entire 2004 Cunard World Cruise aboard Queen Elizabeth 2 and was invited to return for the opening section of the 2005 Cunard World Cruise.

More recent recital work has combined her work as both a singer and harpist. In a concert at Holy Trinity church on Sloane Street she sang, accompanied by her harp teacher, Danielle Perrett, in a concert featuring the Songs of the Hebrides from the collection by Marjory Kennedy-Fraser and returned months later, this time as harpist, to accompany tenor Jake White in a performance of Michael Berkeley's song cycle Wessex Graves. Future engagements include a London performance of Handel's harp concerto.