This harpist has almost 20 years experience as a function and wedding harpist and is the recommended by many popular wedding venues across Southern Scotland.
Share Facebook Twitter
Recommended 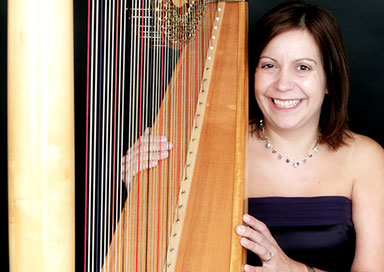 This harpist has almost 20 years experience as a function and wedding harpist and is the recommended by many popular wedding venues. For many years, she held posts as harpist in residence at the Landmark Hotel, Trafalgar Hilton and the London Wetlands Centre and performed at events and weddings at many prestigious and diverse venues including the Hilton Park Lane, Waldorf Hotel, Harrods, Victoria & Albert Museum, Madam Tussauds, The Tower of London, Hampton Court, at the top of the BT Tower, under a tree full of peacocks and in the reptile house at London Zoo!

Since re-locating to Scotland five years ago, she has played at numerous venues around the Country including Gleneagles, the Scottish Parliament, The Balmoral Hotel, House of an Art Lover, Cameron House, Loch Lomond Golf Club, One Devonshire Gardens, Doune Castle, Airth Castle, Culzean Castle and Marr Hall.

She boasts a vast musical repertoire spanning from Classical music, Folk music, Musicals, TV, Film, Bollywood, Classic & Jazz songs to recent pop songs. She is more than happy to welcome any musical requests, where possible, that are not on her list and is also available to play as a duo with a flautist, violinist or vocalist.

She has also worked with the BBC Symphony Orchestra, Royal Ballet Orchestra, Trondheim Symphony Orchestra, held several posts in West End & touring Musicals and played for many famous artists such as Pavarotti, Sir Simon Rattle, Katherine Jenkins, Lesley Garret and Evelyn Glennie at prestigious concert halls all over the World, including the Royal Albert Hall and the Usher Hall.

She has toured as far afield as Los Angeles & Japan and often plays for radio broadcasts and session recordings, including film sessions at the famous Abbey Road studio’s.