This County Derry harpist has performed in Ireland, France and Germany and is available for weddings, parties and corporate events throughout Northern Ireland.
Share Facebook Twitter
Recommended 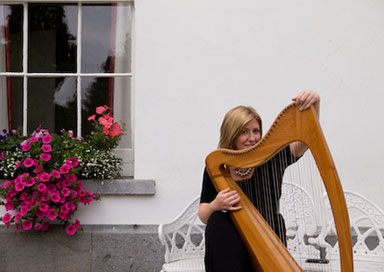 This accomplished harpist is from County Derry and began playing the harp with Dr. Janet Harbison and performed with the Grammy award winning Belfast Harp Orchestra in Ireland, France and Germany. She is available for weddings and events throughout Northern Ireland.

Since then she completed a HND in Traditional Irish Music in the Donegal Gaeltacht and graduated with a Bachelor of Arts in Irish music and dance studies at the University of Limerick in 2009. She also graduated with an MA in Music Therapy at the University of Limerick in 2011 and is now a qualified freelance HPC registered Music Therapist, having started her own company in 2011.

Her harp teachers have in included Laoise Kelly, Grainne Hambly, Michael Rooney, Anne-marie O'Farrell, Maire Ni Casagaigh, among many other fine exponents of the Irish harp.

She has performed for the Queen at the official royal visit of the Titanic Centre Belfast 2012 and was the resident harpist at a five star beach and wedding resort in Byblos, Lebanon in 2009.

She was also resident harpist at Bunratty Castle in 2007 and performed and taught the harp in the Lorient Interceltique festival, and the Isle of Man festival Yu Chruinnaght 2006.

She has played for many state dignitories and corporate functions across Ireland and the United Kingdom, and recorded for RTE, BBC and the Sydney Youth Theatre. She continues to teach and perform the harp based in the North West of Ireland.

“Thank you so much for the lovely music, it made the whole service so relaxing and enjoyable. ”