The Manchester Latin Band can provide you with an upbeat performance for an exciting and lively party or a chilled out set with laid back, smooth Latin sounds.
Share Facebook Twitter
Recommended 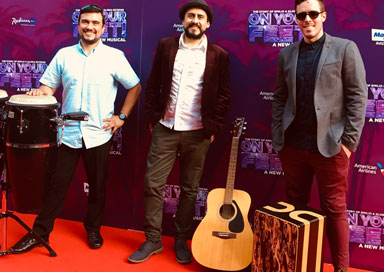 The Manchester Latin Band was founded by a talented and vibrant Latin musician that you wouldn't want to miss!

Guide price is for a solo booking.

His fresh, versatile and unique style has become very popular and well known over the last decade performing in great music venues, special functions, weddings, corporate events and festivals on an average of 150 gigs every year around the UK & abroad.

The Manchester Latin Band will provide you with a breathtaking performance which will create an exciting and lively party, the Latin way! Or if preferred, a relaxed and chilled out atmosphere with laid back, smooth Latin sounds.

The performance can be delivered as a solo act, duo, trio, quartet or even a bigger band if necessary, giving you a blend of modern music with Latin styles, cool vibes and rhythms with awesome musicians to create the best environment for your event.

The Manchester Latin Band have a very diverse repertoire which allows the music to as lively or relaxed as you want it.

So, if you're in the mood for a chilled out night or a crazy Latin party, don't hesitate to get in touch and feel the Latin groove.

In June 2019, we booked them to play at the 'red carpet press night' for the opening of Emilio and Gloria Estafan's West End show On Your Feet and you can see a video of them in action and read about the event on our blog: https://blog.findaperformer.net/on-your-feet/

“He was amazing so authentic and such a nice guy. I would highly recommend him - we had lots and lots of compliments from the public. ”

“David and I found you really helpful when we were searching for an act to play at the wedding - the duo were perfect and just what we were looking for. The day was extremely hectic, and they played during our drinks reception while we were whisked away for photos, so i regret to say that we missed most of their performance. However, our family and guests said they really enjoyed the music, and that it created a great vibe without been obtrusive. Thanks so much for making it all so easy, and please extend our apologies to the duo for not having spent more time enjoying there music. ”

They can provide their own sound system for event of up to 250 people. For bigger events they can arrange a more powerful PA system with you. They require 2 x 13 Amp standard plug sockets for electrical supply.