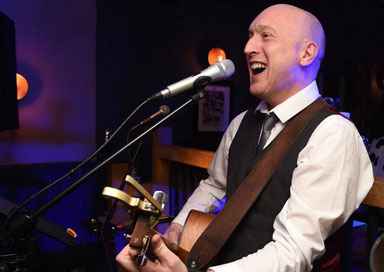 This wedding singer and guitarist is based in the Midlands and available for weddings an events as a soloist or with his band.

His a versatile and entertaining singer who uses guitar, ukulele and bass drum to bring your party or event to life. He is an engaging performer and loves interacting with audiences, inviting them to dance to a lively and eclectic mix of songs from the 1950's to the present day.

The demo tracks are recorded live with a cajon player and some feature his ukulele playing. The duo option with percussion is a very popular choice!

He is also able to provide more gentle and background music if your function requires a more relaxed atmosphere and he has worked for a large number of venues, pubs, restaurants and hotels over the past few years and has received glowing reports, often being recommended to other venues too.

He is available to perform at weddings; during the service, at the drinks reception, during the wedding breakfast or as the evening's entertainment.

His original music has been played a number of times on BBC Radio, with I'm Still Moving On being played on all 33 local BBC stations as part of BBC Introducing.

“He was absolutely fantastic! Really pleased with the performer and would recommend him to anyone. ”