This London Kora player began studying the instrument when he was 8 years old and performs beautiful Kora music from Africa - available for weddings and events.
Share Facebook Twitter
Recommended 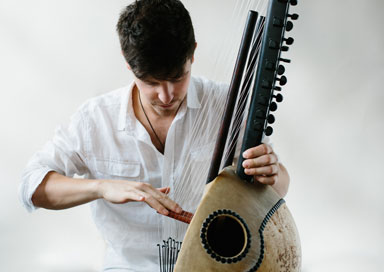 This young musician began playing the kora (a west African 21-string harp) when he was eight years old. First learning from his father, He soon developed a fascination for the instrument and would practice for hours on end, rewinding and replaying cassette tapes of kora masters and figuring out how to play along.

As a teenager, his exceptional talent was spotted by Malian kora legend Toumani Diabate,who invited him to visit in Mali to deepen his learning. He made his first trip to Mali in 2007,aged 17, and since then he has made countless extended visits to Mali and the neighbouring regions, embedding himself in the culture and traditions of West Africa. In this time, Toumani has become his teacher, mentor and friend.

Over the past decade, He has collaborated with a number of leading musicians from Africa and Europe, including Sampha on his Mercury Prize winning album, Process. He has played at prestigious venues including the Royal Albert Hall, St James’ Palace, the renowned LeDiplomate club in Mali and several UK festivals including WOMAD, Tribe of Doris, Tropica lPressure and Shambala. Winner of the World music category at the Welsh International Harp Festival in 2018, he also has been featured in Songlines Magazine and has delivered a TEDx talk on his life and his music.

Now living in Bristol, UK, He teaches, plays and creates his own music. As well as teaching private students, He runs a regular workshop at Basel Music Academy in Switzerland and residential workshops in the UK as part of his co-founded venture, Korason Workshops. He also works with Live Music Now, providing music therapy to people in hospitals, care homes, hospices and special schools.

“We booked him to play the Kora at our wedding reception. Communication before the event was easy and organised. Its difficult to put into words but his performance was magical, and provided us with the dreamy atmosphere we hoped for. He is an exceptionally talented musician and our guests really enjoyed his music. Niamh & Ben, June 2019 ”

“He arrived when expected, was dressed nicely, was supportive, helpful and is a talented Kora player! The booking process was easy and communication was really good. ”

“Dear Geoff, just to say a huge thank you for organising Jake to play at our wedding. We were absolutely delighted with his kora playing. He was really fantastic; and truly helped to make it the special day we'd hoped for. There were lots of compliments from our guests about him for us, his music was the perfect complement and addition to our day. Thank you for making it happen & for all your efficient organisation on our behalf - it's an excellent service that you offer. ”

“All went very well with the concert, he was a great performer and the audience loved it! All well also with the booking process. Kind regards ”

“Thank you very much for your mail. Yes, the performance was very successful. In fact, it was a blockbuster. :) Most of the guests are still talking about the music. Many of the guests were musicians and artists and they truly appreciated both the instrument, the music and his involved performance. He was here on time, was turned out well and I will certainly be connecting with you and have been recommending your services to other people. So if you get a burst of enquiries from India, you know where it started. :)Thank you for collaborating. ”

“Dear Geoff, the event was a huge success and his playing was widely acknowledged and enjoyed. He arrived with plenty of time for us to experiment with the amplification and was kind enough to play on later in the evening. There was a simply beautiful sound as guests came up the grand staircase ”