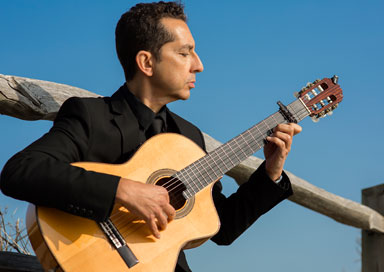 This Sussex based flamenco and Latin guitarist is available for weddings and functions in Sussex,Surrey, Kent, Hampshire, London and beyond. He is an accomplished singer and guitarist able to perform a wide range of material in both Spanish and English. He has a guitar style that is both melodic and rhythmic having studied Flamenco in Spain and also played in a diverse range of styles in the U.K. His voice lends itself perfectly to interpreting songs by The Gypsy Kings, Santana, José Feliciano, The Buenavista Social Club and other well-known Latin-American, Cuban and Spanish artists.

He can play a mix of background instrumental music and guitar and vocals and is a very versatile musician.

His set includes songs such as Volare, Bamboléo, Quien Será (Sway) and Quizas Quizas Quizas (Perhaps Perhaps Perhaps) amongst many others.
Being sensitive to clients needs’, he is able to adapt his performance to suit any atmosphere whether mellow and relaxing or lively and animated.

Equipped with a compact Bose P.A. system or a very portable battery-powered amplifier, he is able to provide a high quality sound that is pleasing to the ear at any appropriate volume.

Previous clients include The Burj Al-Arab hotel in Dubai, The Dorchester, Grosvenor and Hilton hotels in London, American Express, H.S.B.C. bank, The London Aquarium and The Royal Academy Of Art.

This guitarist can also be hired with a Flamenco Dancer

“How kind of you to send me an email saying how much you enjoyed the evening. You beat me to it, I was about to send you the very positive comments from the Secretary which I received this morning saying how much they enjoyed your playing at the summer party last night. He phoned me especially this morning to say your music was a great success and made the evening most enjoyable. I am glad that you got good feedback from members and committee and suspect that the gentleman and his wife you chatted with was either the Club Chairman or Club President which must have been lovely for you to get their positive comments. Hopefully you will be asked to play there again at another party sometime in the future. ”

“The evening was a great success and the guitarist's performance added greatly to that, so thanks very much to you both. He was very flexible and adapted his play list to the atmosphere and purpose of the evening and I have only heard positive feedback. Best wishes ”

“Thank you so much for organising the Spanish Guitarist for us. He was professional and very good. Will hopefully be able to invite him back soon. ”

“We had a lovely night and Pepe was amazing, all of our guests really enjoyed listening to him. He was extremely friendly, smart and punctual, we will definitely have him back soon. ”

“Very many thanks for arranging for Pepe to play at my birthday party on 22nd July. He showed real sensitivity to the ebb and flow of the day and played exactly the right kind of music at the right moment, allowing conversations to flow but at other times had guests joining in with some of the better known Latino songs. His lovely music created the precisely the Spanish atmosphere that we were looking for, despite the British weather, which gave a pretty good impression of a tropical monsoon. He was a professional, smart, pleasant and welcome addition to our party and I would recommend him to anyone who is seeking a classy Spanish act for their event. ”