This brother and sister have been immersed in Flamenco from an early age, performing at family fiestas and gatherings at their home in Córdoba, Andalucía.
Share Facebook Twitter
Recommended 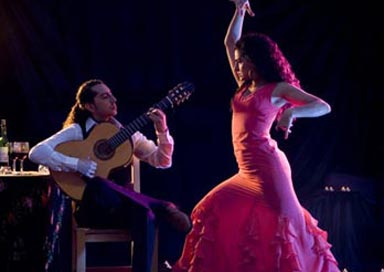 This brother and sister have been immersed in Flamenco from an early age, performing at family fiestas and gatherings at their home in Córdoba, Andalucía. They now both perform in Spain and the UK as well as running courses on flamenco dance and guitar accompaniment.

As well as their live shows and teaching, they have appeared on Meridien Television, BBC and Channel 4 as well as being filmed by Formula 1 to celebrate the Grand prix win by the Fernando Alonso.

The Guitarist has been playing the guitar since he was 8 years old, having studied primarily with his Uncle who is a professional flamenco guitarist now based in Barcelona. He plays regularly, accompanying dance classes for his sister but also has a thriving flamenco guitar school where students benefit from his deep understanding of Flamenco music by the individual classes and group workshops he runs.

He is in demand not only as an accomplished Flamenco guitarist but also as a writer and performer of Latin music of which he also has produced an album.
His compositions have been featured in the highly successful American cop series "The Shield" and in 2005, the BBC radio series "Musica sin Fronteras" (music without frontiers) dedicated a programme to his original music, featuring an in depth interview and 8 of his songs. The programme was broadcast throughout Latin America as well as in Europe and the UK.

Due to his wide knowledge and interest in other Latin and Hispanic musical genres, he was invited to host the 2006 Regent Street Festival, London. This required him to introduce and interview (in Spanish) dozens of musicians and artists to an audience of over 2000.

The Dancer has trained In Flamenco with some of the best teachers in Spain including Belen and Mario Maya, Mercedez Ruiz and Ciro. She has been teaching for over 9 years and has runs a minimum of 8 classes a week.

In addition to her work as a teacher her dancing and choreography have been featured in several television programmes and advertising campaigns including Deutche Post, Holiday and Openwide International Cruise Ships. Her understanding of this art form has made her a real resource and she has not only been interviewed by BBC Radio and My Spirit radio but her writing on Flamenco has been featured in publications such as Sussex Life, The Argus, Sussex Women as well as the Spanish Flamenco magazine Alma 100. Her authentic Flamenco artistry and striking image has been used to sell some of the top Flamenco albums throughout the world.

They are consummate professionals, always maintaining high standards in their presentations, however large or small the line-up, they have gained a reputation with agents and client alike for being the leaders in their field.

'The dancer not only personifies the confidence, strength and drama of this beautiful dance, she spreads that energy …5 stars!’ Miranda Glavin, Latest 7 Magazine May 2012

'Her smouldering show sweeps away flamenco cynicism...and like a fleeting mediterranean thunderstorm, it was over before the evening was old.’ Worthing Herald November 2010

From soothing guitar solo to a thigh slapping rendition of Gypsy Kings’ ‘Bamboleo, the music and mesmerising dancing was as much a highight of the night as was the food.’ James Wallin. The Argus June 2016

‘The audience were suitably wowed by the dynamic guitar rhythms, emotion of the singers and the explosive footwork...Olé we say!’ Totally Magazine, Richmond and Twickenham

‘Their show is an ideal choice, this show is a true expression of flamenco at it’s best.’ Kent and Sussex Courier: September 2014

“Thanks, they were very good and all enjoyed very much ”

“She was punctual, easy and friendly to contact and gave a fabulous performance and lesson. She was inspiring and talented and our evening was unforgettable as a result. Highly recommend! ”

“Pasion Flamenco Duo were excellent and for those members and guests alike, enjoyed the short lesson at the end of their programme. They arrived in plenty of time and were very flexible, working with us with regard to timings when the meal was being served. ”

“I'm so sorry I didn't meet you on Saturday- it was all so hectic and busy. I just wanted to thank you for the beautiful music and fantastic dancing. It really made the atmosphere and everyone loved it. Apologies for the enthusiastic guest. ”

“I didn?t get a chance last Thursday to thank you both for a fantastic evening?s entertainment. Everyone I have spoken to since the event has mentioned how much they enjoyed your performances. Thank you very much! ”

“I wanted to contact you again to say a massive thanks for putting on such a beautiful and memorable performance for my family on Wednesday evening. The dancing was mesmerising and has indeed inspired me to learn flamenco! I was particularly touched by her foot work especially as she had a sore toe but she was incredible!!! Your playing and singing was so beautiful that it transported us all immediately to lovely Spain itself!! You were both incredibly professional, kind and attentive to our requests which I very much appreciated and you were certainly one of the biggest highlights of my mother's birthday as she absolutely loved every minute of the show. I hope to see you again in action very soon and I wish you both a very happy and healthy 2017. ”

“The flamenco dancer and guitarist were fantastic and really made my husbands birthday! They were punctual and very friendly and we made them welcome and had the most enjoyable evening! We are all suffering today but worth it ! Thanks again ”