This sitarist has a long family history of music & completed his Masters Degree at the Maharaja Sayajirao University of Baroda, India. Available for all events.
Share Facebook Twitter
Recommended 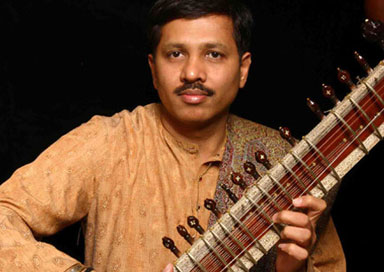 When music runs in blood, it is bound to make one feel the blood go through his vein in awe of an artist like this one. Hailing from a distinguished lineage he has inherited music as legacy from his father who is a renowned Tabla and Pakhawaj artist, and his grandfather - a well-known Sarangi player, singer, writer and poet. From the tender of age of seven, he displayed an exceptional ability to grasp any element of the art and pursued it with mature dedication. His talent in music was tuned to perfection by his training and ardent endeavor to develop inner strength and empathy with the classical lineage of Hindustani music.

He emerged as a talented musician completing his Masters degree with 1st class from the Maharaja Sayajirao University of Baroda, India. In 1982 the late renowned sitar maestro Shri Arvind Dighe accepted him as his disciple. This was a turning point in his life. he was educated in the “Guru Shishya Parampara” style, a vision of music with its roots firmly planted in the classical and spiritual aspects of Dhrupad (the traditional style of singing) and whose disciples learn music as a development of the inner self.

In 1982 he had his debut concerts in India. Since then there has been no looking back for this exceptionally talented musician to give numerous concerts in India and abroad. His concerts have been highly acclaimed and noted for their sensitivity, aesthetic appeal and musical insight. He has a fine command of technique, evoking the various textures of the music and its moods. He is known for his innovative blending of Eastern and Western instruments in his creative work. One can feel the deftness of his hands, purity of his spirit, by merely listening to his performance, which makes the listener sail through a new sky of reveries.

During the period between 1989 and 2004, he was a teacher and head of the sitar department at the Bhartiya Vidya Bhavan - Europe’s major institution of Indian music and allied performing arts, where he shared his great musical heritage with his sitar students.

In 1998 he had the privilege to perform of the Westminster Abbey, London, in the presence of Her Majesty the Queen and His Royal Highness the Duke of Edinburgh on the occasion of an Observance for Commonwealth Day. He is the first Indian classical artiste to ever perform at the Westminster Abbey, London. From September 1991 to March 1992, he participated in a documentary made for the Horniman Museum. The documentary was about Sitar and Indian Classical Music. It explored different aspects of sitar playing techniques, as well as two performances of Raga (traditional classical music).

He has given many BBC television and radio performances and has tasted success not only as a music performer, but also a composer. His compositions have appeared around the world in the famous BBC series “Dangerfield”.
He is a dedicated teacher, who loves sharing his musical legacy with his students at the workshops conducted by him. His talent as a musician goes way beyond concert halls, TV and radio performances. He has played in many Ashrams, hospitals and hospices around the world. He believes that, “Music is an important tool for healing and can be used effectively to spread harmony, bliss and world peace”.