The London Flamenco Guitarist can also be booked solo or with a dancer for Spanish themed events and weddings with optional Spanish vocals.
Share Facebook Twitter
Recommended 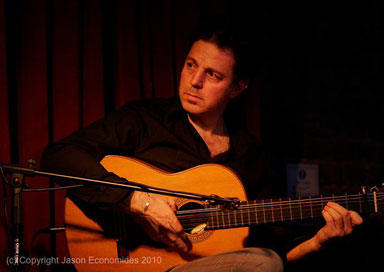 The London Flamenco Guitarist is a leading flamenco guitarist, performer, composer and flamenco guitar teacher at the London College of Music, Morley College and Richmond Music Trust. He has a LTCL Diploma in Classical guitar recital and music theory and has mastered the art of Flamenco solo guitar, song and dance accompaniment in Andalucia.

This act is also available with a flamenco dancer: Click Here to view their duo profile

He performed for four years in Spain's leading flamenco Tablao “Los Gallos” - a venue where Flamenco is performed on a daily basis in a line-up of up to 15 artists. Based in Seville, he was accompanying world class dancers including Juana Amaya,  Isabel Bayon, Iniesta Cortes and Loli Flores.  He also played in the Alcazares de Sevilla for "El Mimbre".

The London Flamenco Guitarist has performed live at over 2000 venues in the UK, Europe, and around the world with extensive international and European television appearances including a private performance for Murray Perahia, the worlds leading classical pianist.

He also performed in flamenco at the Royal Festival Hall in aid of Save the Children with the Alma Flamenco dance company in a line-up of artists including Diego el Cigala and Juaquin Grillo as well as at the Olympia Exhibition, London “Viva Espana”.

The London Flamenco Guitarist is presently signed to Naim Audio record label for whom he composed, arranged, performed and produced an internationally distributed recording which gained him extensive UK, European and international television performances.
He is also a composer, writing and performing original scores for flamenco dance companies, broader Spanish arts and diverse fusion dance companies.

Currently performing in the West End production of Zorro which features the music of the Gipsy Kings.

“Great performance. He played all types of flamenco making our evening special. He even played "sevillanas" on request of the guests, which made our evening even more memorable ”

“The flamenco guitarist played at our wedding and helped to make it a very special day. He is a wonderful guitarist and played beautifully for our guests. He was so professional too, we can’t recommend him highly enough! ”

“He was an absolute delight - humble, well mannered and polite, an amazing guitarist who all the guests were complimenting! I couldn't praise him highly enough and wholeheartedly recommend him as a performer. ”

“He was fantastic, a great way to start the evening. Beautiful music and lovely person! ”

“He was absolutely amazing. We loved his music he played for us at our wedding. Such a lovely man as well. Very reliable and an amazing Spanish guitarist ”

“Excellent - all the guests really enjoyed the afternoon which was made more enjoyable by the guitarist. Thank you ”

“He played at our wedding drinks reception - it was perfect. ”

“Really good performer who interacted well with the guests, would book again :) ”

“Hi Geoff, We are back from honeymoon and are trying to get our lives back together!! I wanted to say a huge thank you as he was absolutely AMAZING!!! Please pass this on to him for us. I only heard him during the signing of the register but the music was really beautiful and he did exactly what we were hoping for. I would recommend him again with out hesitation and am very grateful to you for making it happen. Many thanks again! ”

“I just wanted to let you know how splendidly he played at my party on Saturday. It was just what I wanted and it really helped with the party atmosphere. Many of my guests were musicians so his playing was very much appreciated! He played until 10.00 so I reimbursed him for the extra half hour. He is extremely focused and professional and I would warmly recommend him. I was only sorry we didn't also have a flamenco dancer...!!!! Many thanks to you, and I know where to come for my next party!! All the best ”

“He was great and seemed to enjoy the day too... He was punctual, well dressed, very unassuming, played beautifully. Over the 3 hours he played a mixture of Spanish classical and other contemporary tunes that he selected, as appropriate to each stage of the wedding. Lots of guests commented on how good he was and how it created a beautiful atmosphere. 'Classy' was another compliment! Really positive feedback all round. As part of the planning, he kindly accepted our request to accompany the wedding party on foot to the reception, and it was great touch. Walking through the streets and parks of South London on a sunny day with flowers in bloom, and the beautiful music will be one of the fondest memories I have of my wedding day. Bravo! The service of Find a Performer was very efficient. Having initially selected a different musician, I received a call outlining the work and proximity of another musician who sounded more suitable. Any queries I had regarding the contract were explained very quickly via email or phone call. I can only recommend their services. ”

This guitarist also has the option of a battery amplifier which is very useful for outdoor bookings.