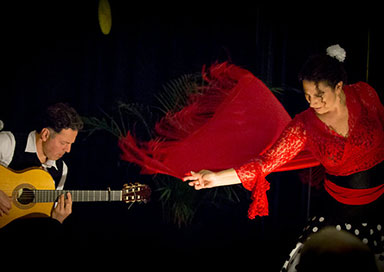 This London flamenco guitarist and dancer are available for private functions, Spanish themed events and concerts in the South East.

The Guitarist is one of the UK's leading Flamenco Guitarists. He is also a Composer and the registered Flamenco Guitar teacher at the London College of Music, Morley College and Richmond Music Trust..
He trained and mastered the art of Flamenco solo guitar, song and dance accompaniment in Andalucia, performing for four years in Spain's leading flamenco Tablao "Los Gallos" , a venue where Flamenco is performed on a daily basis in a line-up of up to 15 artists. Based in Seville, he was accompanying world class dancers including Juana Amaya, Isabel Bayon, Iniesta Cortes & Loli Flores. He also played in the Alcazares de Sevilla for "El MImbre".

He has performed live at over 2000 venues in Europe, the U.K. and around the world. Also, extensive international and European television appearances including: Private performance for Murray Perahia, the worlds leading classical pianist. Flamenco at the Royal Festival Hall in aid of save the children with the Alma Flamenco dance company in a line-up of artists including Diego el Cigala and Juaquin Grillo.
He has also toured with award-winning musical, comedy group "Ole" including acting and comedy performances and has performed as Flamenco Guitarist at Olympia in London for the "Viva Espana" exhibition.

The Dancer was born in London in 1966. She attended the 'Kenmore School for Dancing' at the age of five. By the age of 16 she had completed the ISTD 'Imperial Society of Teachers of Dancing' Syllabus and went on to further her dancing career performing in the UK.
In 1985, her interests turned to flamenco music and dance. Having studied the basic forms of the art in London, she moved to the heart of Andalucia, Seville, where she received personal tuition from highly acclaimed dancers, namely, Juana Amaya, Matilde Coral and La Tona. Using her singing talents in Spanish song, she interpreted Rumbas and Sevillanas in the Andalucian Ferias between 1991 and 1994.
In 1995 she relocated to northern Italy where she joined forces with the flamenco guitarist and performed in renowned Italian Theatres.

She also made a debut at the Teatro 'Sistina' in Rome with the world-famous flamenco guitarist Victor Monge 'Serranito' for which she received a rapturous response from audiences and critics alike.

She has been interviewed on Italian national television, RAI1, RAI2, Telemontecarlo 2, Canale 5& 'Buona Domenica'.
In 1999 she recorded a transmission with BBC1 and LWT 'Saturday Night Alwright' with Ian Wright and in 1997 she joined the award-winning flamenco comedy show 'OLE' that tour worldwide, and in April 1999 with a full flamenco ensemble made her first appearance at the Royal Albert Hall.

“Lovely lady and tailored her performance to our needs ”

“Fabulous!! Met all our expectations! Thank you. ”

“Both guitarist and dancer were outstanding. The performance was fantastic and they also enabled participation of all the wedding guests.Philip and I really enjoyed the show and would definitely recommend this act to friends and family. ”

“The flamenco duo were amazing! They arrived promptly, were very professional, and their performance was astounding. The guests were completely enthralled. Though they did not get a chance to speak to them after their set, I have been given many a compliment to pass on to them. Please thank them for their wonderful work and thank you for making the booking process so smooth and easy! I hope to book more acts from you in the future. ”

“The flamenco duo were fantastic and a lot of members have taken the trouble to email me and the Secretary to say how much they enjoyed the evening. Thank you for the efficient manner in which you made the arrangements and I can assure you that we will return in the future. ”

“I hope you are well. Just wanted to say a big THANK YOU for your set on Saturday. You and Mark did an amazing job. All of the guests loved it and kept talking about how great you were after you had gone so thanks again for pitching it just right to our intimate little group. All the best. ”