This classical guitar duo started playing together in 1992 whilst studying at the Royal Northern College of Music and are available for weddings and events.
Share Facebook Twitter
Recommended 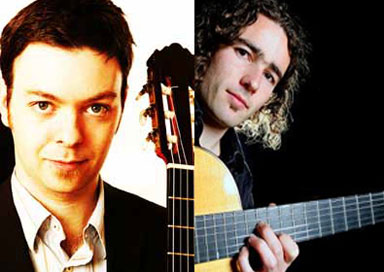 This classical guitar duo started playing together in 1992 whilst studying classical guitar at the Royal Northern College of Music and are now based in London. Between them they have had lessons and master classes with some of the top name in the guitar and music world including John Williams, Gordon Crosskey, Anthony Rooley, Juan Martin and Stephen Dodgson.

They have recording contract with Telstar and have also performed in orchestral works conducted by Yan Pascal Tortelier and Marcus Stenz.

David studied at the Royal College of Music and the Royal Acadamy of Music before the RNCM. In his teens, he won several music competitions including the Chiltern Radio Young Musician of the Year, and performed widely, culminating in him being the representative for the UK in the European Young Musicians Concert in Brussels.
He has an honours degree from the RNCM and is a guitar tutor and performer in London.

Jerry studied in Leeds University, Holland and London, and has travelled extensively giving concerts throughout Europe and recently gave a televised concert in Turkmenistan for the British Embassy. He has also studied the art of Flamenco Guitar. This has given him rare insights into the Spanish repertoire.
He also favours beauty and contrast of tone as one of his primary means of expression, in the manner of the past masters such as Andres Segovia.
This combination gives his playing a rare quality.

The Guitar Duo draws on an ever-expanding repertoire, which includes selections of classical, jazz, Spanish, flamenco and popular music.
Programs can easily be adjusted to your special requirements.

One of the Classical Guitarists is available as a Solo Act Here.

“I actually intended to write and say thank you, but we went off on honeymoon and have been quite busy since our return. I can only say nice things, they were punctual, looked good and relaxed, they played beautifully and everyone was complimentary and my only regret is that I didnt get a chance to listen to them some more, the time flew by and there were so many people to see and talk to. But all in all it was a very good booking so many thanks ”

“I'd just like to leave some feedback on the musicians from Find a Performer. We booked the guitar duo to play music for our wedding in December 2016. The booking process was straight forward. The musicians set up very discreetly and without any fuss. They played before arrival of the bride, entrance of the bride, during signing of the registers, our exit and from then on during our wedding breakfast. They were very professional. I'm not a musician so couldn't say if they were good or not so I asked some of my guests who thought their playing was excellent. Thank you all. Alastair ”