One of the finest Sitar players to emerge on the UK Indian music scene, she has been receiving accolades for her outstanding ability and quality of music.
Share Facebook Twitter
Recommended 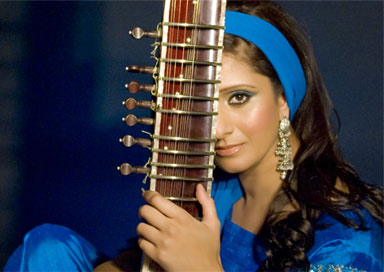 Considered one of the finest Sitar players to emerge on the Indian music scene in the UK, this performer has been receiving accolades from audiences and peers alike for her outstanding ability and quality of music.

Her soulful and unique style of playing has left her listeners captivated. With the incredible emotional depth of her sound, she has touched the hearts of audiences far and wide and received blessings from many  eminent musicians in the world of Indian classical music. She is a disciple of the renowned educationalist and leading musician, Ustad Dharambir Singh ji MBE (a disciple of the late Ustad Vilayat Khan), and was recognized  as a talent for the future.

She began her training at the age of seven, under her Guru, and later has had the privilege of also learning from the senior most disciple of the late Ustad Vilayat Khan, the great maestro, Pandit Arvind Parikh ji.

She has toured extensively in the UK, Europe and USA performing at prestigious venues and festivals and released her debut album “Khoj” in 2011. She performed in her debut tour of India in 2014 where she played to vibrant audiences in Delhi, Mumbai and SRA Kolkata.

She has had the honour of performing before and received blessings  from spiritual masters and eminent musicians including Sri Satya Sai Baba, Shri Satguru Jagjit Singh Ji (Namdhari), Mata Amritanandamayi (Amma), Sri Sri Ravi Shankar and the late Ustad Vilayat Khan. She is also a qualified Chemical Engineer, is involved in numerous projects to inspire and educate the next generation of Indian classical musicians in the UK.

This act does not provide her own amplification.