This Newcastle solo flamenco, Spanish and classical guitarist is perfect for Spanish themed events and weddings throughout the North East of England.
Share Facebook Twitter
Recommended 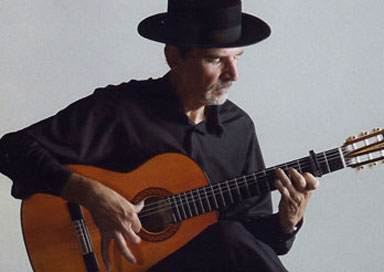 This guitarist began studying the classical repertoire and technique, but later deciding to specialise in flamenco and Spanish traditional music when he had an opportunity to study with Tomas Jimenez in Spain. In his quest to learn and develop flamenco guitar playing skills he has had tuition from Juan Martin and Francisco Antonio in London and John Fillmore and Jasper Lockefeer in Amsterdam. In addition he has often travelled considerable distances to see professional performances of guitar, song and dance to broaden his experience and knowledge of the different disciplines.

Over the past two years he has worked with the flamenco singer 'El Punti' in performance and at schools giving workshops and individual tuition. He also accompanies dance students during classes and professional dancers in performance.
Flamenco is governed by rules of form, but within these there is scope to develop individual style. Each performance is unique and its content determined by the mood of the moment. To play this way requires years of familiarity with the subject and complete comfort with the guitar. He has performed regularly in front of audiences since becoming a professional and listed below are some of those venues and locations.

Playing and teaching experience:
'Darlington International Summer School,' assisted Juan Martin on his Flamenco Guitar course.
'Northumbria Guitar Society Summer School,' taught and directed the flamenco guitar course.
He initiated and ran the 'Newcastle Pena Flamenca' (which became one of the most successful in the country), organising each monthly event for a year and a half before moving to the Midlands.
He played (solo) in the cabaret for the 'Miss UK' final in London; BBC Radio Newcastle; Nottingham Playhouse; Glasgow Pena; Newcastle Pena; Matlock Pena; Leeds Pena; Bowes Museum Barnard Castle; BBC 'Music Live' Newcastle; weddings, promotional events (e.g. Fenwick Department Store Newcastle and for a new car launch for Nissan Motors) conferences and banquets.

He has played at corporate events and conferences including: 'Women in Business' (Hull); ILT (Newcastle & Belfast); SEDA (Manchester); Northumbria University (Longhirst Northumberland); He arranged and played the music for a production of 'Romeo and Juliet at the 'People's Theatre' in
Newcastle. He also composed and played the sound track for the animated Twisted Tales video "The Tragedy of Harriet and the cigarette'.
While travelling in New Zealand in 1999 He was invited to give solo concert performances at the Carnegie Centre and the Town Hall in Dunedin, and during a second visit in 2001 played solo and accompanied dance on a tour of South Island including Queenstown, Dunedin and Wanaka.

Additional information:
He can to put together programmes (of classical and flamenco music) to suit a particular occasion or venue, teach guitar technique and repertoire on a one to one or workshop basis. He has his own sound equipment which is ideal for small venues being compact and portable, easy to set up and dismantle.