The Bollywood and Western Singer 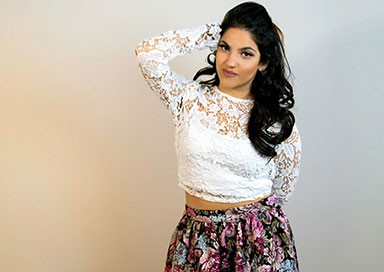 The Bollywood and Western Singer - Vocalist with Solo & Duo Options

Born to Indian Gujarati parents and brought up in Nairobi, this singer has been surrounded by music from a very young age.

Package Options: (Guide price based on a duo booking)

She sings in Hindi, Gujarati and English and can perform Bollywood and pop as well as bhajans and religious songs.

Her love for singing began under the strong influence of her mother, and exploring both Western and Indian classical and light forms of music, she has spent the last fifteen years performing across the world on many prestigious platforms.

She has also trained in semi-classical Indian music at Suresh Wadkar’s music school in Mumbai as well as participated in various musical workshops held by the BBC.

In 2015 she starred in 'Bend It Like Beckham The Musical' in London’s West End, playing the role of Simi, the heritage singer.

She was fortunate to be spotted by A R Rahman during the musical and was asked to fly to Chennai to record background vocals for Gurinder Chadha’s movie “Viceroy’s House” which released in cinemas in March 2017.

Over the years she has performed at the Alchemy Festival in the Southbank Theatre with the Concert Orchestra, as part of the London Indian Film Festival, with the CBSO in Birmingham and many other exclusive events in the UK and across the globe.

Having performed at over 500 concerts and events worldwide, her musical journey continues to develop. She has collaborated with Naughty Boy, Arjun, Ellie Goulding and Preeya Kalidas and is excited to release new material and projects that are in the pipeline.