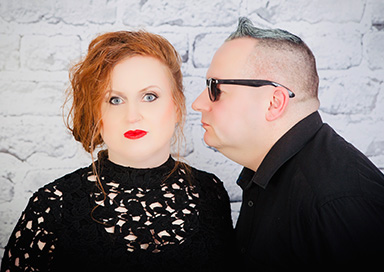 Looking for an 80s Tribute act or Alison Moyet Tribute?

The singer grew up in Johannesburg, South Africa and moved back to England, becoming a professional singer from the age of 14 which was in 1985.

In the last 35 years, she has toured the world with her singing career, working as a soloist, in duos, trios, bands and all the way up to being lead singer with the QE2 Orchestra on board Cunard.

She has written songs with famous songwriters such as Pete Brown, who wrote many of Cream’s hits and has albums on all major platforms.

She has previously worked in ABBA/1970s tribute bands, a Corrs tribute band, and is now performing a tribute to Alison Moyet.

She can be booked as a solo tribute or as part of a duo with her keyboard player.

The synth player first became interested in synthesizers when he first heard John Michel Jarre and Kraftwerk. He has spent the last 3 decades performing in tribute bands to Genesis, Kylie Minogue, Blondie and in his own synth bands. They found each other when he was searching for a vocalist who sounded like Alison Moyet and their duos were born in 2017. They have since toured Scotland, Wales and England but have a European tour supporting 1980s group Trans X in 2022.

“These guys thoroughly entertained us all at The Paddocks Bar, Blandford. Great range of 80’s tunes belted out with ease. Look forward to booking you again without hesitation ”

“Fantastic duo, great singing and selections of songs, makes you feel like you're back at an 80's gig. They are very friendly and great performers. Very highly recommended. ”

“What a great band, If you like your 80's music then this act is a must. They kept our crowd dancing all night to some fantastic tunes with the crowd shouting for more at the end and on top of that they have fantastic personalities and were great fun to be with, we will be definitely booking them again, absolutely brilliant, see you soon guys. ”