The Greek Bouzouki Player performs as a One Man Band specialising in Greek weddings and Greek themed events at restaurants, hotels, golf clubs throughout the UK
Share Facebook Twitter
Recommended 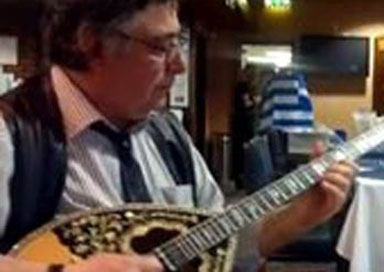 This Greek artist was born in Corfu where at the age of 7 he joined the world renowned Mantzaros Philharmonic Society remaining as an active member until a few years ago, playing clarinet and saxophone. Later he studied piano, guitar, keyboard and bouzouki, as well as synthesis and orchestration.

He performs as a one man band playing bouzouki along to a backing that he has synthesized and orchestrated himself.

Greek bouzouki holds the principal role resulting to a high quality prof performance and the repertoire is specially designed for a British audience. As his repertoire is very demanding, vocals are not included unless singers are trained or tasted, through rehearsal, by him.

However, he include vocals and guided audience's participation in Greek dancing at no extra cost. A Greek dancer can always be added into his performances but not by him or on his expense.

In 2006 he decided to introduce the "Live Greek popular music theme night" aiming to offer the real taste of the Greek music culture. The concept epitomized in the proper instrumental performance of not only the very famous old Greek pieces of music but also famous modern hits that currently played in the best bouzouki tavernas in Greece. The repertoire is continuously updated, the music played by every single instrument in his virtual band, in every single, is orchestrated/mixed separately (live and no loops) and the bouzouki is played live.

This Greek bouzouki soloist is able to provide a full band sound using 'Advance Sonic Digital Technology' resulting in a high quality live sound that you have never experienced before!

The Greek Bouzouki Player's repertoire is very large and tailor made to British audiences and he has been performing for Find a Performer for all kinds of events in the UK since 2005. Greek nights, Greek weddings, Greek themed parties and lots more!

The Greek Bouzouki Player performs all the latest hits currently played at the best Bouzouki clubs in Athens, but without compromising or missing out the old style classics and renown songs!!

You will be very excited to experience that Greek music and culture is not limited to Zorbas and Sirtaki!!

The repertoire is specifically selected and tailor made to British audiences and with the latest addition of advanced Digital hi-tech equipment, he is now integrating 'Greek Party' – live Greek karaoke songs (for Greek clientele)

For weddings (and other events if required) The Greek Bouzouki Player can include some exceptional Italian instrumental pieces from the 1960's 1970's and 1980's with orchestrated backing on synthesizer.

This music will keep your guests happy on any type of event.. not only for Greek Theme Nights!!!

He has been commissioned for 2 TV music productions, 1 commercial and 1 reality show (Channel 4), performed at many top restaurants, bars, golf clubs, charity events, private and corporate events all over the UK.

Corporate clients include shopping centres, Jet2 Holidays and Ryanair where he was booked to play at airports around the UK.

The Greek Bouzouki Player performs all the latest hits currently played at the best Bouzouki clubs in Athens, but without compromising or missing out the old style classics and renown songs!!

You will be very excited to experience that Greek music and culture is not limited to Zorbas and Sirtaki!!

The repertoire is specifically selected and tailor made to British audiences and with the latest addition of advanced Digital hi-tech equipment, he is now integrating 'Greek Party' – live Greek karaoke songs (for Greek clientele)

“Professional, outstanding can’t wait to have a party and use him again! Efharisto ”

“He was fantastic and was more than accommodating! He was also very happy to stay a bit longer when events started to run over. He is very kind and a lovely man! Highly recommended! ”

“He was very professional and we very much enjoyed his music! ”

“Costas was fantastic. He was a brilliant addition to the wedding and his music made the day very special. ”

“Everything fine thank you – he was punctual, friendly, and very accomplished. Will be in touch in the future – thanks for your help. ”

“We were very happy with Constantine thank you. He was on time and very professional with his time keeping, playing until every single customer had left. I will certainly be using your service again in the near future ”

“We had a wonderful night - he arrived in plenty of time, in fact he started playing early. He was absolutely lovely and his music was very authentic. Perfect for our evening. I would actually like to book him again for next year at round about the same time. The service from your company has been good and I would definitely use you again. In fact I am planning a Spanish night if you have anything you can recommend? ”

“He was brilliant yep!!! Very funny man and played for an excellent amount of time. We were very happy indeed with him and the service we received from yourselves. Thanks a million ”

“We were very happy with Constantine, his performance was excellent. His time keeping was spot on and he played well over his scheduled time. I think he really enjoyed the night as much as we did. The booking process was easy with lots of regular contact with all parties. ”

Tech Requirements: 1 plug socket close by to the performance spot