This swing band performs all over the UK doing theatre tours as well as providing entertainment for private and corporate events. Available from duo to big band
Share Facebook Twitter
Recommended 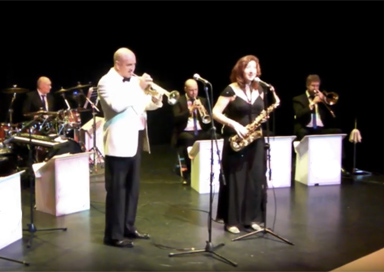 Guide price is based on a duo.

Looking for a classic swing band reminiscent of the Glenn Miller era? The swing band performs all over the UK doing theatre tours as well as providing entertainment for private and corporate events and the band can be scaled to fit your budget, from duo to big band.

He has also provided a Fanfare for Princess Diana and Prince Charles, performed for HM Queen Elizabeth, and on stage alongside Michael Cain and Jay Leno in the film “Silver Bears”.

He has also worked on US & UK tours with pop band “Mari Wilson” and Simone has performed for and with Leonard Bernstein, John Williams, Paul Weller, Hollywood film – “Lace 2”, British TV & radio jingles.