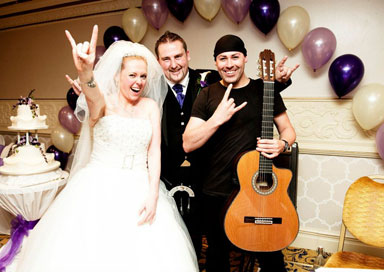 The Glasgow Wedding Guitarist started playing the guitar at the age of 15 and his early influences include Clapton & bands ranging from Huey Lewis to Bon Jovi and Kiss. His more recent influences have ranged from Steve Vai, Joe Satriani, Paul Gilbert and Jennifer Battern to John Williams, Adrian Legg and Albert Lee.

The Glasgow Wedding Guitarist took lessons for around 8 months mainly reading music & folk/country basicsand then moved to rock guitar lessons for around one year. His interests then expanded to other styles - Classical, Funk, Jazz and Heavy Metal.

The Glasgow Wedding Guitarist practiced daily for at least 6 hours and soon improved his skills and joined his first group at 18 years old and played a few pub gigs doing cover tunes. He then started teaching after 3 years - whilst also developing his own skill playing in various local bands followed by joining the newly-formed group "Goodfellas" and played with top quality musicians for 5 years or so. During this time with "The Fellas", he formed a duo with the vocalist and played acoustic covers in various styles.

After taking singing lessons, The Glasgow Wedding Guitarist began performing solo gigs on an acoustic guitar, also playing at various functions with a classical guitar. In 1996/97 he entered the "National Guitarist of the Year" competition run by "Guitarist" magazine (electric guitar) and reached the final six and played an original entry piece "Big Brother" at the Wembley Conference Centre at the National Music Show.
In 1998/99 he entered the "Acoustic Guitarist of the Year" competition and again reached the final 6 and played at the show. Although he didn't win he was told that no one had ever reached finals of both categories and that it showed versatility. He is now pursuing a better career in music whilst writing his own material.

“I wanted to say thank you for playing at our ceremony and also for the drinks reception. You were the perfect choice for our wedding day! It was also nice for Greg and I because as it was raining outside we had our photo’s taken inside and we got to listen and enjoy your music. Thank you for making our day even more special! ”

“Let me say that Paul and I were really impressed by your performance at our Wedding Reception. You were better than we had even hoped for and believe me our expectations were high. We have had so many people compliment you on your playing and singing, I don’t think they thought one man could do all that! ”

“Kris and I would just like to say a big thank-you to you for agreeing to play at our wedding.  …   We had quite a few comments before the wedding as to were we sure that one man on guitar was enough – listening to those same people after the wedding they have done nothing but rave about him and to quote ‘its the best party they’d been to in ages’  …   we couldn’t have asked for a better end to the day!!  We certainly wouldn’t hesitate in recommending him to anyone. ”

“A massive thank-you to you … When we were speaking to the staff at South Lodge Hotel after the Big Day, they made a point of saying to us that you were the best wedding entertainment they had ever seen! …” ”

“Thanks so much for an excellent afternoon/evening’s entertainment.  …   We knew to expect a great evening but you exceeded that expectation by a mile!  … you delivered a set that had everyone young and not so young up on the dance floor at some point.  There were even a few folk who refused to believe that this was the same guy who a few hours earlier had been playing Spanish guitar on the terrace while we drank champagne in the glorious sunshine. ”

“His vast range of musical talent shone through and was picked up on by the feedback from the guests most of whom had never heard him play before. A special thanks for also for learning a very special song for our first dance it meant a lot to us. He is so versatile in what he can play that we would not hesitate in recommending him for your special day.  … ”

“My family really enjoyed him playing at Pittodrie House Hotel for the evening reception.  He is a great musician with a wide and varied repetoire so there’s something for everyone.  He is a professional, first class entertainer.  Highly recommended. ”

“Thank you so much for your contribution to Caroline and Gustavo’s wedding on Saturday. Your playing was absolutely fabulous and gave the Spanish Theme a wonderful lift. It was absolutely lovely and so many people commented on how beautifully you played and how great the tunes were. I know it was harder for you to set up being outside but everyone appreciated your contribution to the day and it made such a difference. Many many thanks. ”

John (Father of the Bride), Berwickshire

“We wanted to thank you again for everything on the wedding day. We really were delighted with the music, both the classical throughout the drinks reception and the evening reception. Loads of our guests commented on how good you were and thought it was actually a record playing! ”

“Just wanted to say a huge thank you for all your lovely guitar playing at Ben and Lindsay’s wedding last Saturday. The classical section was beautiful and your evening session was brilliant. Everyone was amazed and enthralled by your skills. People kept saying ‘who is that guy – he’s fantastic’. And you were – you helped to make it an unforgettable day. ”

Irene (Mother of the Bride),

“Thanks so much for being a part of our Wedding, you sounded fantastic and everyone commented on how great you were. Cavatina sounded amazing walking down the isle, and I can’t wait to hear it again when we get the video back. Thanks again! ”

“Gustavo and I just wanted to say a huge thank you for making our wedding day so special. It meant a lot to us to have the Spanish element present in our day, and your fingers played magnificently. Several of our guests commented on how beautiful the music was. You have made it a day to remember. ”

Caroline and Gustavo (Bride and Groom),