This Elton John Tribute act has been working as a tribute artiste for over 10 years in one of the top ABBA tribute bands.
Share Facebook Twitter
Recommended 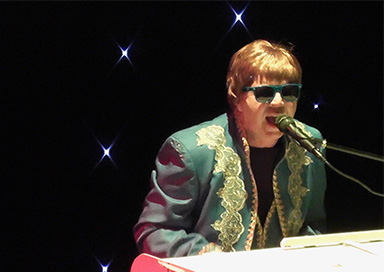 This Elton John Tribute act has been working as a tribute artist for over 10 years in one of the UK's top ABBA tribute bands.

Since 2017, he has been performing as an Elton John Tribute around the UK and Europe in theatre shows, hotel cabaret and private bookings.

The Elton John Tribute performs on a mock white mini grand piano with LED lighting and performs many of Elton's greatest hits.

He has been told his vocals accurately bring to life an Elton John concert, and many comments about the closeness of his vocals to Elton and just like Elton himself, he is a natural performer.

He provides with his own PA and lighting system and can be booked as a soloist or with a 4 piece band creating a fabulous live concert event.

Also featured in the show are duets which Elton performed including "Don't Go Breaking My Heart" and "Written in the Stars" as he can be joined on stage by his wife who is a multi award winning tribute artist herself.

In 2019 he performed on a tour in Cyprus to great acclaim and also in London's Canary Wharf.

He can perform up to 2 x 45 min sets and can be self contained with his own PA and lighting if required.