This duo is available for all kinds of events and their shared musical interests range from from Middle Eastern, Klezmer and Sepharadic music to Jazz.
Share Facebook Twitter
Recommended 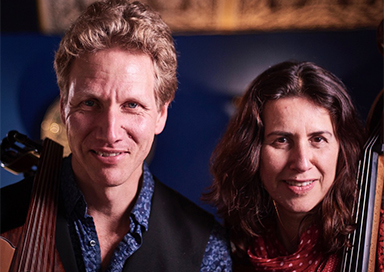 This oud and double bass duo is available for all kinds of events and their shared musical interests range from from Middle Eastern, Klezmer and Sepharadic music to Jazz.

Their music is a tapestry of rich colours, driving rhythms, haunting tunes and imaginative improvisations, using various techniques such as soulful bow playing, harmonics on the Oud, micro tones and slides, all produced by two instruments producing luxurious. and beautiful tone.

The repertoire includes music from both the Middle Eastern and Ladino repertoire as well as originals.

The double bassist and composer was born in Israel and had her musical education in New York. Since then she moved to the UK, she has released 4 CD’s on major UK and US labels and has received commissioned grants to compose Jazz, World music and crossover genres music. She has performed internationally in Europe the far East and USA.

The oud player is a much in demand for his work on the oud, guitar and for his composing work. He was born in Germany and moved to the UK for his musical studies and is based in Bristol. He has written music for theatre, film and animation as well as concert music including an oratorio and a song cycle telling stories of displaced people.

He currently performs with another band performing Jewish and Arabic music), a Jazz Ensemble, a Sudanese duo and an improvised comedy show.

“It was wonderful, thank you so much for the uplifting input at the party. ”

“What a fascinating combination this pairing turned out to be; the rich resonance of the bass contrasting beautifully with the higher timbres of the oud, The audience was left keen to hear more – the mark of an exhilarating performance. ”