This fantastic London based saxophonist is available as a duo with guitar or piano, a trio with double bass or as a full jazz band - ideal for parties & events
Share Facebook Twitter
Recommended 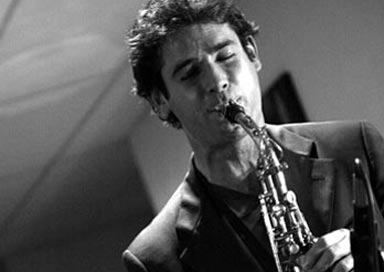 This London based saxophonist is available as a duo with guitar or piano, or as a full jazz band.

Since completing his Postgraduate Degree in Jazz at the Guildhall School of Music and Drama in the year 2000, this saxophonist has performed in Jazz Clubs all over the UK playing with some of the most respected jazz musicians in the country. Recently he has finished producing his new jazz album based on the black and white photographs of the great Magnum Photographer Elliott Erwitt.

In December 2005 he did his debut concert at the Purcell Room, Festival Hall promoting his new CD with his quintet. The performance was followed by a favourable review in The Evening Standard.

Born in Milan in 1975 from an Italian father and Australian mother. He started playing the alto saxophone at the age of 18.
In 1994 he took part in a weekly jazz seminar organised by Berkley College of Music, taking place in Perugia as part of the ‘Umbria Jazz Festival’ and in that same year he was accepted at the Birmingham Conservatoire where he graduated with a BMus first class honours degree. During those 4 years of college he studied with saxophonists Andrew Tweed, Chris Gumbley and Nigel Wood both classical and jazz repertoire. In the summer of 1996 he took part in the Jamey Aebersold Summer Camp in Kentuky and had the chance of performing and studying with saxophonist Don Braden and Jazz Educators David Baker.
Between the years 1999/2000 he completed the Postgraduate Jazz course at the Guildhall School of Music and Drama, London. While attending the course he studied with ex-Jazz Messengers saxophonist Jean Toussaint, and saxophonists Stan Sulzman and Martin Hathaway; he performed in small combos and big bands with Billy Cobham, David Liebman, Kenny Wheeler and Norma Winstone. He also took part in several master classes some of which with renown jazz musicians such as saxophonist Tim Garland and bass virtuoso John Patitucci.
Across the years, since successfully completing his Postgraduate course, he has gained a considerable reputation in the Uk jazz scene appearing at many jazz clubs and Festivals in the country as a sideman and leader. Some of the venues include : The ‘Vortex’ Jazz Club, The 100 Club, ‘Pizza on the Park’, Royal Festival Hall Foyer, Boxford Fleece Jazz Club, Plymouth Jazz Club, Bonington Theatre, Jazz in the Streets Festival ( concert in Trafalgar Square), Bexley Heath Jazz Club, National Theatre, Jazz at The Green Man, Derenham Jazz Club, Quay arts Centre, Milestone Jazz Club, Matt and Phreds Jazz Club, Gumbles Jazz Club, National Portrait Gallery, Capital Gardens Jazz Festival, Chelsea Festival, Windsor Festival.

He has performed with some of the most respected uk jazz musicians including: Jim Mullen, Roger Beaujolais, Phil Lee, Liam Noble, Jonathan Gee, Dave Cliff, Tim Richards, Roland Perrin, Andy Hamill, Steve Brown, Mike Gorman, Colin Oxley.
In the year 2003 He and pianist Joan Taylor started a new project called ‘Jazz Meets Classical’ performing repertoire of ‘classical composers’ from the 20th Century who influenced and were influenced by the Jazz idiom ( M. Ravel; C. Debussy; J. Ibert; A. Piazzolla to name a few).
The duo across the years had the chance of performing in many churches and music clubs in London and frequently appears at the Victoria and Albert Museum as part of the ‘Late View Program' concert series.
In the summer of 2004 He had the chance of working with Film composer Dario Marianelli ("Pride and Prejudice"; "The Brothers Grimm") recording music for "This Little Life", a BBC drama for Channel Four.
View similar acts:

“The event was a success. Both performers were really good, they delighted my guests. They made the party memorable and unique. I'm so glad that I called you guys. You have in me a lifetime promoter. It was amazing, the music was really good, created a fantastic atmosphere, just what I wanted. It was the best party I have organised. I'm really happy I called you guys. Thank you so much for making my event unforgettable. ”