Solo flamenco guitar music lends a wonderful and exotic atmosphere to any event and ‘Flamenco Puro’ does not disappoint with his utter mastery of the tradition.
Share Facebook Twitter
Recommended 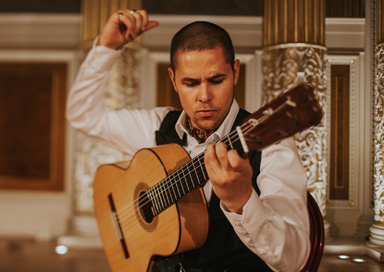 Looking for a flamenco guitarist in Yorkshire? Solo flamenco guitar music lends a wonderful and exotic atmosphere to any event and ‘Flamenco Puro’ does not disappoint with his mastery of the tradition.

‘Flamenco Puro’ is a nationally respected flamenco guitarist with a vast performance repertoire and professional experience. He was taught to play by the world-renowned flamenco guitarist Juan Martín and has since gone on to sculpt his craft performing in some of the world’s top concert halls. ‘Flamenco Puro’s’ musicianship has been described as “Fantastic!” by BBC Radio 3, “Masterful!” by the legendary jazz guitarist Kenny Burrell, and “very tasteful playing that makes the guitar sing.” by Guitar International Magazine.

Alongside ‘Flamenco Puro’s’ busy international tour schedule, he is also available to perform at private events: weddings, parties, corporate engagements and proms. For all such bookings, ‘Flamenco Puro’ presents wonderfully crafted, diverse and virtuosic solo guitar sets steeped in the richest and purest forms in the flamenco tradition. From fiery and dazzling palos such as the bulerías, to foot taping Latin American rhythms such as rumba, and even subtle and moving flamenco laments such as seguiriya, ‘Flamenco Puro’ brings a ray of Mediterranean sunshine to enhance any occasion. Don’t miss out, book him to perform at your event today!

Alegrías, literally meaning joy or happiness, is one of the most cheerful sounding palos. It adheres to a strict twelve beat rhythmic structure: 1 2 (3) 4 5 (6) 7 (8) 9 (10) 11 (12) and is believed to have been brought to Cadiz by soldiers during the War of Independence (1808-1814). It is a strictly structured dance and often ends with a transition to bulerías.

Fandango. While the fandango’s musical roots can be traced back to the time of Muslim Spain (711- 1492 A.D.), folk influences from northern Spain, such as the Jota: a pared dance from Aragon, are also significant. During the 19th century, the fandango was absorbed into the flamenco tradition and gained many regional variations, most notably Huelva: Fandangos de Huelva.

Farruca is thought to have originated from Northern Spain and was probably introduced to Andalucía by Asturian and Galician travellers often referred to as farrucas. It has a strong 4/4 rhythm (four beats to the bar) with a prominent accent on beat one and a lighter accent on beat three.  Though farruca can be sung, it rarely is. Traditionally it was a male only dance, but today it is common for both women and men to dance it.

Garrotín is a flamenco form that originated in Galicia in northern Spain. It is a cheerful sounding palo caricaturised by its use of major keys and a strong 2/4 rhythm (two beats to the bar).

Granaína. As the name would suggest, granaína originates from the beautiful city of Granada. It evolved from the fandango and is always played free of time (toque libre). Most commonly a granaína is sung with guitar accompaniment but it can also be performed as a dramatic guitar solo.

Malagueñas. A palo originating from Málaga caricaturised by strong melodies and a profound and solemn feel. A malagueñas is commonly played rhythmically free (toque libre), though sometimes the performer moves to a rhythmic form towards the end, for example: malagueñas y fandango or malagueñas y verdiales.

Rumba. Like the guajiras, rumba is a Cuban form that became absorbed into the flamenco tradition in the 20th century. Despite it being a recent addition to the flamenco repertoire, rumba is one of the best-known palos amongst modern audiences.  This is largely due to its popularisation by mainstream music groups. However, the true flamenco rumba pre-dates these modern manifestations.

Sevillanas is a folk dance that became absorbed into the flamenco tradition. Despite it’s name, it didn’t originate in Seville but rather evolved from seguidilla, an old Castilian dance. It is an extremely popular palo and is regularly performed in fiestas across Andalucía. Compositionally a sevillanas comprises four separate sections (four sevillanas), each in a different key. Each sevillanas follows a strict compositional structure:  first the guitar sets up the rhythm with a short rasgueado (strumming) section. This is followed by the salida (a short melody). Another short rasgueado section links this to the copla (verse), which usually finishes with the melody of the salida.  The copla is played three times before the sevillanas comes to an abrupt end.  The key then changes and the whole process repeats itself for the second sevillanas, then again for the third and fourth.

Siguiriyas is widely believed to be one of the oldest song forms in the flamenco tradition.  The Spanish poet Federico Garcia Lorca once described it as being pure enough to perform in a place of worship without upsetting divinity. It is a profound and emotional palo traditionally sung with guitar accompaniment using the A Phrigian scale. Siguiriyas adheres to a slow twelve beat rhythmic structure: (8) 9 (10) 11 (12) 1 2 (3) 4 5 (6) 7 and its subject mater tends to be of: tragedy, great loss and suffering.

Soleá or soleares is believed to originate from the 16th century cant (song form) soleades, meaning solitude or loneliness. As the name would suggest, the subject mater of soleá tends to be about great loss and suffering. Its rhythmic structure is the same as that of the alegrías: 1 2 (3) 4 5 (6) 7 (8) 9 (10) 11 (12). However, soleá is generally played slower and has a less rigid compositional structure. Like alegrías, a soleá is sometimes concluded with a transition to bulerías.

Tarantas originates from the province of Almeria in eastern Andalucía and is always played rhythmically free (toque libre). It is a palo that can be sung or played as an atmospheric guitar solo, but not danced. Its unique and dark sound is largely due to the creative use of dissonance (discordant notes) particularly on the F# chord: a recurring theme throughout. When sung, the lyrical themes of tarantas often reference mining.

Taranto. In contrast to the toque libre tarantas, the taranto has a strong and regular compás with a 4/4 rhythmic structure (four beats to the bar). Its basic chord structure is the same as that of the tarantas and much like the tarantas, when sung, the lyrical themes of taranto often reference mining.

Tangos.  The flamenco tangos are essentially a family of rhythmic forms that, despite their name, are in no way related to the Argentinian tango.  The compás of the flamenco tangos is based on a fast 4/4 rhythmic structure (four beats to the bar).

Tientos is a slow song form with a 4/4 rhythmic structure (four beats to the bar). It originally developed as an expressive variation to tangos. Tientos’ themes tend to be about: lost love, imprisonment, and longing for freedom. It is common for tientos to speed up towards the end and thus move into tangos.

Verdiales is one of the lighter flamenco song forms originating from Almagía close to Málaga. It derived from the fandango and as such is sometimes referred to as fandangos de Ma?laga.

Zambra. During the era of Muslim Spain (711-1492 A.D.) Arabic culture dramatically in influenced Andaluci?an society.  This later fed though into the flamenco tradition and Zambra is the best example of this. Zambra is a beautifully evocative palo that draws on Arabic scales and alternate guitar tunings to emulate the sound of the Oud (the Arabic guitar).

Zapadiado, literally meaning ‘tapped with the shoe’ is the general term for footwork in flamenco dance. It is also the name of a specific dance form, traditionally a virtuoso solo for male dancers at fast tempos. Zapadiado can also be played as a dazzling guitar solo with memorable melodic passages and a strong 2/4 rhythm (two beats to the bar).