This talented Jester will fill your event with laughter and wonderment with juggling, magic and general tomfoolery! Great for kids parties and events
Share Facebook Twitter
Recommended 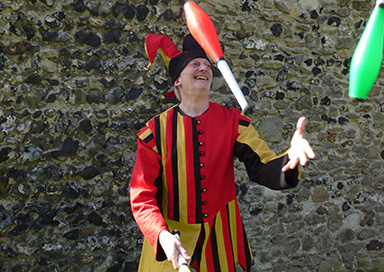 Nodkin the Jester - Jester and Magician

This Jester has delighted audiences of all ages with his quick wit, unique humour, and specialised skills. With a wealth of experience as a trained magician, juggler, and all-around entertainer, he has carefully honed his skills to develop his marvellous jester act. Based in Kent, he can travel throughout the UK to any party, castle open day, fayres, village fete, wedding, and any other event in need of entertainment.

Nodkin has performed at a large number of medieval fayres, banquets, and festivals, as well as several other events, and has succeeded in providing excellent, world-class entertainment to every guest at these events. He is fully insured and performs every act with the safety and enjoyment of every guest in mind. He also holds a current DBS certificate. Get in touch today to book Nodkin the Jester for your next event, and make it one your guests will remember for years to come.

“It was such a thrill having Nodkin on board this year at our annual Christmas event! He was absolutely brilliant and the children were mesmerised. He was everything we had hoped for and much much more. We certainly hope he'll come back next year! We were all bowled over with him! All the team thought he was absolutely the best and I’m so glad I picked him from the 9 jesters that were available. ”

“Nodkin was great. So flexible to what the weather was doing, to the needs and abilities of our residents and really joined in the fun of the afternoon - would love him to come back again ”