This guitar and violin duo is available for concerts and functions in the London area and beyond, and was formed by two Spanish players who met at the Guildhall
Share Facebook Twitter
Recommended 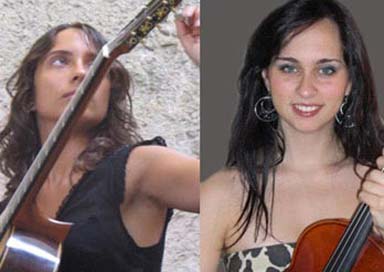 This guitar and violin duo is available for concerts and functions in the London area and beyond, and was formed by two spanish players who met at the Guildhall School of Music and Drama while studying a Master’s degree in Performance-Advanced Instrumental Studies. Since then they have been working together, focusing her repertoire on composers that have been influenced by popular music, but also working in other fields, as classical repertoire and improvisation.

Having been working as professionals separately during the last few years, and after one year studying Chamber Music with different teachers from GSMD, they are now developing their professional performance career as a chamber music duo.
This duo is an original well-balanced string duo, with a repertoire focused in composers that were influenced by traditional music, like Manuel de Falla, or Heitor Villa-lobos. Their aim is to contribute a novelty to the London musical landscape, offering interesting proposals and extending as much as possible the possibilities of this ensemble.

The Violinist was born in Almeria (Spain) in 1985. She started her music studies when she was 9 years old in Real Conservatorio Profesional de Almeria . She completed her Bachelor's degree in Music in Conservatorio Superior “Manuel Massotti Littel” in Murcia (Spain). During the academic year 2008/2009 she studied on the Guildhall Artist Masters Programme at Guildhall School of Music and Drama, being awarded the MMus degree in Performance- Advanced Instrumental Studies. Her teachers have been: Jose Angel Velez, Joaquin Palomares and Krzysztof Smietana (current teacher).

She has been a member of numerous youth orchestras such as Orquesta Joven de Almeria, Joven Academia II de la Orquesta Ciudad de Granada, Orquesta Joven de Andalucia, Joven Orquesta Nacional de España. As well, she has collaborated with some proffesional orchestras as Orquesta Sinfonica de Murcia and Orquesta Ciudad de Granada. Since 2001, she is a member of the proffesional Orquesta Ciudad de Almeria .With the mentioned orchestras, she has accompanied soloists as Dimitri Ashkenazy and Maxim Vengerov, and she has been conducted by Daniel Barenboim, Christophe Coin, Vladimir Ashquenazy, Lavard Skou-Larsen, Diego Masson, Gloria Isabel Ramos, Pablo González, Enrique Mazzola, Jose Luis Temes, Arturo Tamayo and Michael Thomas.
She has perfomed in different regions of Spain, Portugal, France, Italy and United Kingdom.
The Guitarist was born in Castelló de la Plana (Valencia, Spain) in 1984. She completed her undegraduate studies in Escola Superior de Música de Catalunya in Barcelona, with Zoran Dukic and Àlex Garrobé. She also studied Chamber Music with Xavier Coll and Feliu Gasull, and Improvisation with Emilio Molina. Her final degree project, about the relation between music and poetry, was marked as ‘Distinction’.
She’s actually coursing Master’s degree at Guildhall School of Music and Drama, with David Dolan (Classical Improvisation), John Parricelli (jazz guitar) and Robert Brightmore (classical guitar).

She has been in a wide variety of international courses and masterclasses with different professors, including: David Russell & Roberto Aussel.
This guitarist can also be booked as a soloist and in other ensembles: