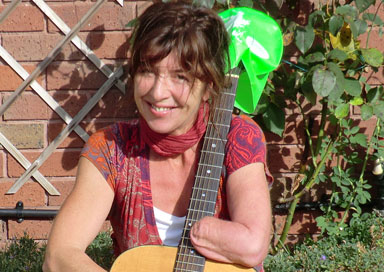 Sublime, beautiful and simply crafted using just guitar and voice through a small amplifier, this guitarist provides music that helps create a relaxed atmosphere, With 4 albums to her name, her repertoire also covers over 200 popular songs. She recently appeared on BBC Radio Devon and TEDx in Holland. Venues have spanned the globe and include many weddings, tea houses, festivals & ferries!

For as long as she can remember, she has always played music… playing in 20/30 piece orchestras at school, brass bands, choirs and making up the odd tune on the keyboards at home. Her "career" as a guitarist started at 13, teaching herself and jamming with friends. She joined her first band at 17 as a backing vocalist and keyboard player performing in the south-west of UK every weekend for two years. The years that followed saw her playing guitar, songwriting and performing with another songwriter, David Hill.

In 1990 she travelled around Australia and New Zealand, songwriting all the way with her guitar as a constant companion. Here, she had her first busking experience and performed her own material to sit-down audiences. In 1993, she had her first solo gig, supporting Marc Carmel, at Ronnie Scott's in London — a famous jazz venue and well-known for showcasing. Following that, she then joined a 13-piece group playing guitar, percussion and vocals. They performed for the next three years at festivals all over the UK and performed live with Billy Bragg on the Acoustic Stage of Glastonbury festival. Later, she teamed up with a contemporary folk group as a backing vocalist, drummer and percussionist. Again, they performed at festivals all over the UK plus Europe and Ireland including Cambridge Folk Festival and Glastonbury.

In 1999, she recorded her first album with two gifted musicians, Richard Osborne and Matt Tweed. The release of this was successful and established her as a singer/songwriter in her own right. The three of them became known as Hearth and in 2002 a 2nd album was released. They performed at many festivals and events around the UK including Cambridge Folk, Jersey Festival of World Music, Lewes Guitar Festival and again, Glastonbury. In December 2002, she took an 'artist's break' back to New Zealand.

In July 2004, a car accident in NZ resulted in the loss of her left hand. This saw her exploring music and the voice in a way that she hadn't before . Her journey with this led her into teaching voice and guitar to people of all ages on an individual basis and running voice workshops. Two years later, she was playing guitar again. This saw her return to performing at events around the top of the South Island, NZ. With a new wave of inspiration, she released a 3rd album, which gets played on local radio in New Zealand.

“A year or so later you played our song again, this time with me walking down the aisle. You have such talent and we feel extremely lucky to have found you.Having you at our wedding really completed our day and you fitted in beautifully with our theme and the ambiance we were trying to achieve. I can honestly say that our wedding would not have been half as fantastic as it was if you hadn't have been there.You're a lovely person and have been a treat to work with all this time. I would highly recommend you to anyone who asks in a heartbeat. Thank you so much xx ”

“Everyone commented on how fantastic you were at our wedding from start to finish. From the first time we saw you performing in Lyme Regis we knew you would be perfect for our big day...we knew it was fate when you started singing our song! ”

This act also has the option of a battery amplifier which is very useful for outdoor bookings.