This Lancashire 1960's band are available for all kinds of events from weddings to parties and happy to travel throughout Northern England and the Midlands.
Share Facebook Twitter
Recommended 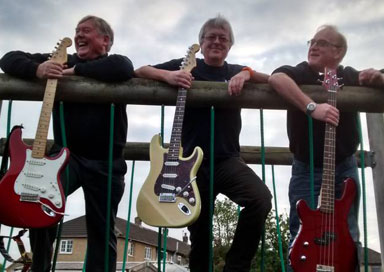 This 4 piece Lancashire 1960's band have spent many years playing live music and have without exception played their respective instruments since childhood.

The common denominator is their collective love of sixties music and they play all the hits by the Beatles, the Stones, the Kinks, The Dave Clark five and many, many more.

Here is a small selection of the songs we cover:

“This great group played for us at our Community 50/60's Dance and they soon had everyone up dancing, some even started when the group were doing their warm up! ”

“These are a sensational 60's covers band, recreating a unique Sixties vibe that is not outdated but sounds fresh and contemporary and suitable for all ages. At our party the guests,both young and older, danced all evening to every song,in fact,the night wasn't long enough. ”

“Thank you for a fab 70th do for my mum, everyone loved the 60s music, very professional and friendly band and thank you for being so accommodating with timings. We had a great night! ”

“This band played for our Silver Wedding Party and were excellent. They played a variety of music and provided a disco for the end of the evening. The party went with a swing for those who wanted to dance and for those who just wanted to listen to the music. This is the second time we've heard them and we would love to hear them again. ”

“Booked the band for my husbands 70th birthday party, what a great night, the music was enjoyed by everyone, young and the not so young, very friendly, guests asking where I found this group, so can see them booking for their own celebrations in the future. Thanks very much to Martyn and the band for making it such a special night. ”

“The band played at our Silver Wedding anniversary party at Grindleton Pavilion last Saturday. As soon as the band started playing, people were immediately up on the dance floor. Despite the difference in age range of our guests, the music played by the band seemed to appeal to everyone. Having the band perform as a live band created a lively atmosphere. All our guests thought they were wonderful. A band definitely to be recommended. ”

PA system will be provided by the band as well as Acme i-Color 4 stage lighting.