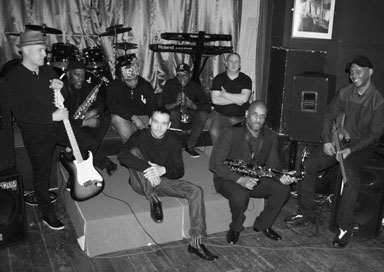 This Midlands UB40 tribute band are the ultimate sound-alike UB4O tribute band featuring their very own AJ's undeniable vocal resemblance to the legendary Ali Campbell. The band are second to none as an entertaining, polished and professional UB40 tribute act.

The band was formed in 2013 and are made up of professional musicians from Birmingham with a wealth of experienec playing t all kinds of events from weddings and parties to theateres and festivals across the UK.

The band strive to give their audiences the closest thing to the real original UB40 & keep your guests on their feet & entertained.

“We booked the band for a Christmas Party at Kings Norton Golf Club on the 5th December 2015 and they where fantastic, they sounded just like the real thing and everyone was up dancing all night. I would definitely book them again. Thanks lads.xxxx. ”

“Outstanding UB40 Tribute band you guys were very good at the festival, I value what you did, I loved it. ”

“Great performance, looking forward to re booking you in the near future. ”

“A job well done recieved a lot of great feedback. ”