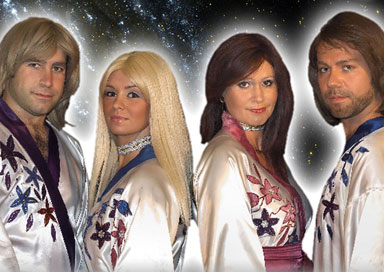 Since their formation in 2002, this Abba tribute band have succeeded in establishing themselves as the UK’s leading Abba tribute show

Guide Price is for a DUO option.

Their professionally choreographed stage show, with many costume changes, faithfully encapsulates the sights and sounds of Abba and their endless stream of unforgettable hits.

Gaining a renowned reputation, returning to venues time and again due to high demand, they also provided the entertainment at "The Highland Games", varied outdoor music events in central London and many high profile conferences. Planet Abba have worked alongside several named artistes, including The Four Tops, Slade, Mudd, Jimmy James and The Vagabonds, 911, Showaddywaddy, The Real Thing, Alvin Stardust, Chesney Hawkes and The Royal Philharmonic Orchestra.

"The Best ABBA tribute I have ever seen, you guys were fantastic!" Derren Brown

"A great choice for a wedding band. Thoroughly enjoyed it. Brilliant!" David Tennant

Recently Abba World were the pre-match entertainment at Leeds Rhinos stadium, live on Sky TV and they were also guests of honour, performing in front of thousands for a radio station in Bangalore, India.

Their professionalism and sheer enthusiasm both on and off stage, have secured them many re-bookings and has earned them a reputation beyond reproach.

“Simply the best Abba Tribute I have ever seen. I was blown away from start to finish. Never before have I seen a band command an audience in the way that you guys did. Fantastic! ”